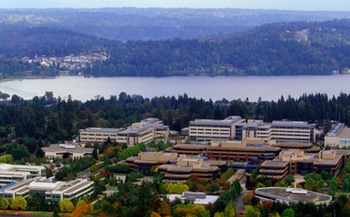 END_OF_DOCUMENT_TOKEN_TO_BE_REPLACED

Stilgherrian’s links for 04 November 2008 through 09 November 2008, gathered via Twitter and spat onto the page with love and some lemon juice and garlic:

Microsoft CEO Steve Ballmer is doing his Power to Developers shtick in Sydney today. I’ll be live-blogging it right here.

The Big Deal is that he’s talking about Microsoft’s strategy for cloud computing or “software as a service” (SaaS) — which I notice Microsoft is calling “software-plus-services”. Is there a difference? I think an essay could be written on that point alone!

Now I must admit I’m fairly sceptical about this whole “cloud computing” thing. Not that it’s a Bad Idea, just that it’s nothing new.

Unless your computer isn’t connected to the global grid we call the Internet, then it’s always been about having a service running on a remote computer (“the server”) and some software on your own computer the mediate your access to same (“the client”).

It seems to me, though, that every few years someone wants to make some big song-and-dance about the idea that they’ve put stuff in their data centre for you to access… and this year’s buzzterm is “cloud computing”. Wow.

Still, it’ll be interesting to hear what Mr Ballmer has to say. And probably more amusingly, how he says it.

END_OF_DOCUMENT_TOKEN_TO_BE_REPLACED

Steve Ballmer, CEO of some tin-pot outfit called Microsoft, is doing his Power to Developers presentation at 3.30pm Sydney time. It’s being promoted as a “Liberation Day” and a “live web rally”. Wankers.

Peel away the pseudo-revolutionary bullshit, though, and there’s something worth hearing about: “Microsoft’s vision around Cloud Computing for the software-plus-services world, followed by demo-packed sessions on the new technologies just announced at the Professional Developers Conference — including the much anticipated Azure Services Platform.”

Using “around” as an all-purpose preposition and failing to hyphenate “much-anticipated” confirms Microsoft’s illiteracy, and The Register‘s negative review of Azure has already poisoned my view. We’ll see.

Then tonight from 6.30pm consulting firm Gartner has “Gartner meets you in the blogosphere”. They’re previewing material to be presented at next week’s Gartner Symposium: “emerging trends and technologies… and what to expect in 2009”.

I’ll be live-blogging both events at special pages on this website. The links will be posted soon. Stand by.