I’ve appeared in The Saturday Paper for the first time today, in a story by journalist Martin McKenzie-Murray with the headline Web of abuse grows as online bullies spread malice. In my very first quoted sentence in this august journal, I drop the c-word.

McKenzie-Murray’s story is great. It explores the same issue as we discussed on ABC TV’s Lateline the other night, namely the hideous violent and sexually-explicit abuse women face online, and the rather disappointing response from the police. Once more, it’s based around the experiences of Caitlin Roper.

McKenzie-Murray goes further, though, and speaks to Roper’s key abuser.

“I disagreed with some of her [Roper’s] statements [about Ched Evans]. I used the word ‘rape’ only for effect however she took it personally. I’ve said many times before that logic would explain the fact that nobody intended on raping her and nobody wishes rape upon her. I did get carried away and did use some obscene language… however, they took a joke out of context and began a witch-hunt of sorts by posting my picture and personal information.”

It’s worth reading the article in full. Despite my presence in it. 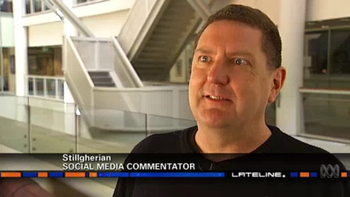