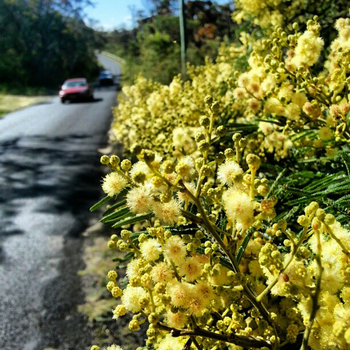 Monday 29 October to Sunday 4 November 2012 was a busy week, made slightly less busy by the need to recover from the throat infection identified last week and then, because I was run down, fatigue that was probably a mix of a cold and hay fever.

Hence the photograph of the wattle I’ve posted here. It is to blame.

Dear Plant Kingdom, if I spread my genetic material all over you the way you do over me, I’d be arrested! Please behave yourself.

[Update 1545 AEDT: I am reliably informed that the hay fever is unlikely to be caused by wattle pollen.]

Also, the Sydney Opera House has posted the video of my Festival of Dangerous Ideas panel, I Share Therefore I Am. I’ll write more about that in due course.

Next week is pretty much all about Singapore. On Monday I’ll head down to Sydney and get some writing out of the way. Then on Tuesday it’s Singapore Airlines flight SQ212 departing Sydney at 0905 AEDT and arriving in Singapore mid-afternoon local time.

Wednesday is Verizon Business’ APAC Media Day, a five-hour meeting followed by cocktails. On Thursday I’m visiting the hospitality tent at the Barclays Singapore Open golf tournament as Verizon’s guest. Friday through Sunday has yet to be finalised, but there’ll be at least two articles to write and a podcast to produce.

Oh, and a social life.

My flight back to Sydney SQ231 leaves Singapore at 45 minutes past midnight Sunday night — so technically that’s Monday morning.

[Photo: Wattle near Railway Parade, near Wentworth Falls, one of the causes of my hay fever this week.]

My appearance at the Sydney Opera House Festival of Dangerous Ideas, which I’ve told you about before why aren’t you paying attention? — draws ever closer. It’s a week from today, and as part of the promotional lead-up they’ve posted a look Inside my Dangerous Mind.

Q: What is a dangerous idea?

A: One where merely expressing it puts the speaker in mortal danger, or in danger of expulsion from society. Examples? Mate, your daughter would look fantastic being sodomised by a goat. Behead all those who insult the Prophet. Pouring the tea before the milk.

Well, I reckon you should read the whole thing.

See you next week? It’s Saturday 29 September at 1pm in The Playhouse at the Sydney Opera House. You can book online.