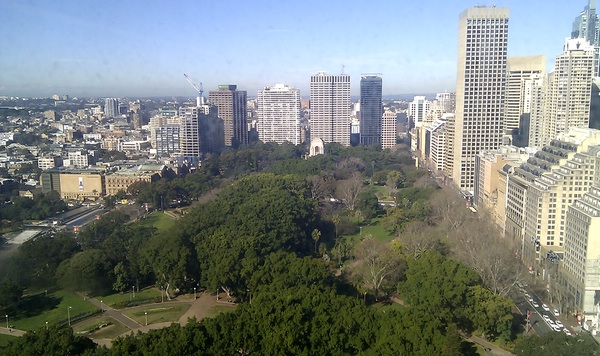 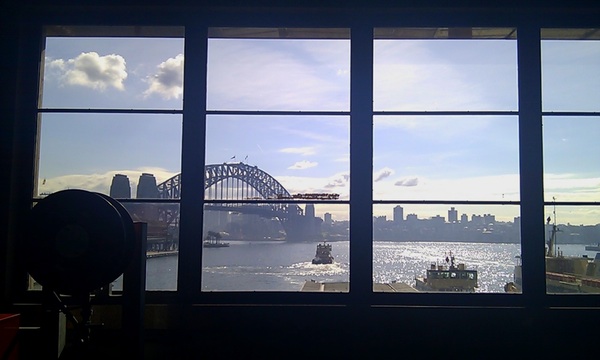 [Photo: Circular Quay viewed from the railway station, photographed on 27 July 2010. We really do take this view for granted.]

Further to my appearance on Radio National’s Future Tense talking Telstra and corporate transparency, last week a little more of my recorded interview was used in their program on Participatory democracy, Web 2.0 and the Government 2.0 Taskforce.

My main point was that people will expect the Government 2.0 Taskforce to do a lot of things — especially given their massive brief — and yet they’ll be disbanded at the end of the year.

There are going to be expectations that there’ll be something really significant to put on the table by Christmas, and yet it’s all uncertain. The uncertainties in all this are incredible. We’re expecting this group of people to essentially solve all of the problems of government 2.0 and have this grand road map in just a few months. It’s an enormous bullet point list of stuff that they’ve got to achieve. And now that people are starting to look at it, they’re realising we’re only at the very early stages of people starting to agree on what the questions might mean, let alone what the answers might look at. And my gut feeling is people are starting to be a bit hesitant about ‘Hey, are we actually going to get something of value at the end of this, or is it just another of the Rudd government’s talkfests to make it look like we’ve got something happening but there’s no real end result?’ I mean the Australia 2020 Summit, did we ever get anything really concrete out of that?

Duncan Riley essentially agreed. But I found the response from Nicholas Gruen, who chairs the Taskforce, interesting.

Gruen says that unlike most government inquiries — and he’s been on eight — this time the recommendations aren’t the important thing. It’s more about educating everyone — including the public service and politicians.

Click through to the program for the full transcript or, for a limited time at least, to listen to the podcast.

My world was dominated by Telstra last week. Apart from my writing and a radio spot about the government’s plans to split the telco, I also spoke on ABC Radio National’s Future Tense on Thursday about the sudden closure of their nowwearetalking blog.

I’d already written about that shutdown here and over at Crikey. However the Radio National conversation was in the more general context of how social media is affecting corporate transparency.

You can listen to the program (at least for now) and read the full transcript over at the ABC’s website. The other guests were Shel Holtz, co-author of Tactical Transparency; Mark Hannah, a New York-based communications consultant; Mike Hickinbotham, Telstra’s Social Media Senior Advisor; and ABC economic correspondent Stephen Long. well worth checking out.

Here’s the full text of my section.

END_OF_DOCUMENT_TOKEN_TO_BE_REPLACED

The guy in the photo is Jerry Watkins, Senior Lecturer in the Faculty of Design at Swinburne University of Technology in Melbourne — and I want to slap him.

This morning he was a guest on ABC Radio National’s FutureTense, where he talked about some fantastic third-world technology projects, like India’s DakNet.

A Wi-Fi transmitter and receiver is fitted to the local bus. So the bus drives along its normal route, goes through a number of villages, and what it’s doing while it’s stopping at the bus stop in each village, is simply picking up and delivering information via Wi-Fi from publicly-accessible computers in each village… Once it gets back into town, it simply uploads all its stored data onto the Internet… So in this way, the rural community is getting access to a very affordable internet connection, it’s just simply not always on…

It’s services like e-shopping which are proving increasingly popular with these users. So e-shopping is using the bus internet system, and it allows villagers to order essential items and luxury items, which just aren’t available at the village market. And what’s more, the items are often delivered to the village on the very same bus with the Wi-Fi transmitter.

Awesome. But that’s not why I want to slap him.