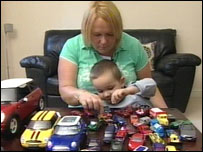 Forget identity theft, your bank account could be at risk from your own web-surfing toddlers.

News from the BBC today that 3-year-old Jack Neal used his mother’s credit card to buy a £9000 pink Nissan from eBay.

“Rachael Neal, 36, said her son was quite good at using the computer, the BBC reports. Well, yes.

The seller of the car, Paul Jones, co-director of Worcester Road Motors in Stourport-on-Severn, near Kidderminster, Worcestershire, said he had been “amused” by the bid. It’s the first time they’ve sold a car on eBay.

He saw the funny side of the event, and has re-advertised the car.