Imagine being so bereft of ideas that the only metaphor you can come up with is war.

Last week Malcolm Turnbull claimed that Labor was declaring war on business, and that the first casualties were jobs. 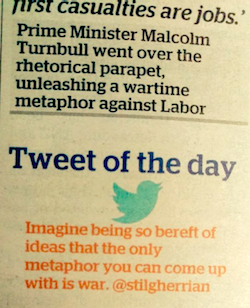 It’s a symptom of the government’s supposed need to look strong and tough on difficult issues. Hence the war on drugs, the war on terror, the war on poverty and so on.

How unimaginative, I thought.

I expressed this opinion on Twitter, as is the fashion.

“Imagine being so bereft of ideas that the only metaphor you can come up with is war,” I tweeted.

That tweet was retweeted 38 times, and scored 36 likes. That’s far fewer than tweets tweeted by major celebrities and the like, but for me it’s at the high end of the scale.

The next morning, 3 June, @aksana tweeted to tell me that my tweet was chosen as the Sydney Morning Herald Tweet of the Day.

She include a photo of the printed newspaper, because Tweet of the Day doesn’t seem to be published on the SMH website.

All this should have been included in last week’s Weekly Wrap, but I forgot. I’ve fixed that now, though.