Having read Mungo MacCallum‘s acidic commentary on the federal election in Crikey, I was eager to read his newly-released “campaign diary” Poll Dancing: the story of the 2007 election. The first sentence tells me I’m in for a great time:

One morning in his tenth year as prime minister, John Winston Howard awoke in the master bedroom of Kirribilli House to realise that he had become not only omnipotent but invincible.

Ah, Mungo! I think I’ll be spending a relaxed Christmas afternoon with you, once I’ve finished reading Judith Brett’s Quarterly Essay, “Exit Right: the unravelling of John Howard”. Yes, I’m making sure I learn the lessons that are to be learned.

One hint to Black Inc Books, though. Please provide an obvious permanent link to your current titles, so the links I’ve just created won’t need to be edited down the track. 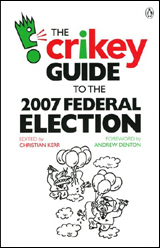 Crikey attempts a difficult task — a book about politics for people who don’t know much about politics. But despite a few minor flaws they pull it off well enough to more than justify the $19.95 price tag.

The Crikey Guide to the 2007 Federal Election is a great way to bring yourself up to speed in this vital election year — but not because of the profiles of key marginal electorates.

The profiles cover the same ground as the ABC Elections website and every print media outlet will give us free of charge once the election date is announced. The maps are so small as to be unreadable — they’d have worked better in a B5 or A4 magazine format rather than a standard paperback. I suppose profiling the marginals is compulsory, but it could have been handled better.

The essays are what makes this book truly valuable.

Editor Christian Kerr has managed to suppress the right-wing bias he exhibits daily in Crikey and provides an even-handed overview of the task facing the major parties, their strengths and vulnerabilities. His profiles of 2-dozen-odd power players are a great spotter’s guide to the people behind the scenes. Charles Richardson provides an excellent overview of Australia’s electoral system and the parties — some of the best in-a-nutshell explanations I’ve seen.

But four essays stood out for me as pure gold.

18 years breeding ducks on the north coast of NSW has not softened Mungo’s tongue. Describing old-school political reporting as “dull as an afternoon with Phillip Ruddock,” his essay is nevertheless a lament for the good old days, when journalists and backbenchers were crammed together in Old Parliament House.

Like the politicians, [the new journalists] are in it for life — terrified of missing a story, but unwilling to take any real risks to obtain one.

Peter Brent of Mumble writes about opinion polls — performing the most valuable service of explaining how to interpret them, given their inherent margin for error.

Reporting political opinion polls must rank as one of the more trivial pursuits for the reporter. If news items were given the emphasis they deserve, political polls would not sit on the front page next to the latest Baghdad bombings, but much further back; say around page eight. They would stand alone in a table with little or no explanation. As an election approached, they would move towards the front, with some words of interpretation.

But opinion polls cost a bomb to produce, so onto page one they must go. Then everyone must pretend that’s where they belong, adding several hundred words of interpretation — turning them over, looking for meaning, interpreting them as good or bad for someone or other, pretending you can identify why the numbers move over a fortnight.

Julian Fitzgerald provides equally insightful profiles of the lobbying industry and of the government’s own factories of spin doctors.

The flaws — apart from those bloody unreadable maps — were that for a newcomer to politics there’s still too much taken for granted. The “WA Inc” episode and the Dollar Sweets industrial case are mentioned but not explained — I’m not too sure about them myself! And if your glossary needs to explain what a “conflict of interest” is, then your reader won’t know that an “informal” vote means an invalid one.

Still, these are minor criticisms. The essays alone make the book worth buying, and this is certainly a handy guide to what’s about to unfold in Canberra and across the nation.

Andrew Denton’s foreword is a reminder that we should be seeing a lot more of this man’s writing:

At first, the signs that a campaign is upon us will be subtle. Overnight, someone will place food in Julia Gillard’s kitchen. Or Bob Katter will purchase an extra-big hat.

But soon the rituals that mark every election will play out across the land. Paul Keating will need to be sedated. Ditto John Hewson. Lubricants of all kinds will be applied to Alan Jones. First-borns offered to Rupert. Piers Ackerman will explode. Robert Manne will implode. Oakes will trump Milne and Ramsey will invoke Hayden. Centrebet will cash in. Gen X will tune out. And people everywhere will struggle to name to leader of the Nats.

One final criticism. In the age of universal word processors, a reference book without an index is inexcusable.

[Disclosures: Crikey paid me to write a story based on one of my blog posts, and will probably publish another on Monday. However I bought this book with my own money and wrote this review of my own free will. I have drunk beer with Antony Green, and survived.]