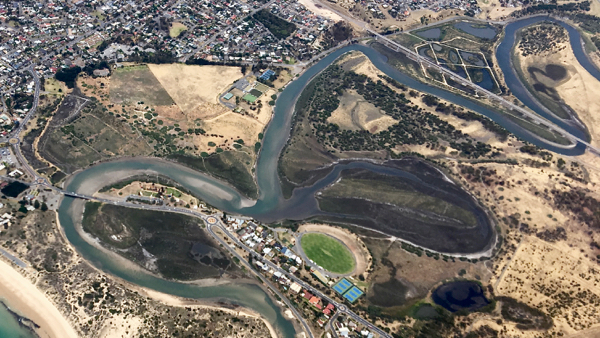 I picked up some gastric bug over the Christmas weekend. On top of the mental exhaustion from the Adelaide trip the previous week, as well as the usual end-of-year stresses, it was all a bit too much. So I spent most of the week in bed.

It turns out you can live on a diet of gin and chocolate chip ice-cream for a surprisingly long time, but it does make your poo smell a bit funny.

None, for the reasons just stated. Call it a holiday. Everyone else seemed to have one.

[Photo: Lower Onkaparinga, photographed on 19 December 2016. The last few meandering curves of the Onkaparinga River in South Australia before it discharges its water into St Vincent Gulf. The river mouth itself is just below the bottom of the shot. I took this photo from a Melbourne to Adelaide flight just as the aircraft turned to run up the coast to Adelaide Airport. I’ve boosted the contrast and such to highlight the landforms. Consider it an abstract.]