A new semi-regular feature, Gentle Readers. Found Art. Objects which I’ve stumbled across in the street.

Today, a Returned Property Docket from the NSW Police Service. It records in detail (and fairly poor typing) exactly what was being carried by S– when he was detained at the Newtown police station, and which was subsequently returned at 2.24am on a Saturday morning.

A life, in summary.

Don’t worry, S–, I’ve shredded the original. Though if you were concerned about your privacy you wouldn’t have thrown it into the street.

’Pong and I have just let The Simpsons Movie and Burger King absorb an hour of our valuable attention in exchange for turning us into yellow-skinned characters. Simpsonize Me is a promotional tool for the film, but one which gives you a toy to play with — the ability to turn your photos into characters from The Simpsons — in exchange for a bit of brand reinforcement.

I reckon this is how “interactive advertising” has to work. A fair exchange of value. As opposed to Audi’s over-produced self-indulgent wank, where they get your psychometric profile and you get — well, nothing.

The question now, of course: How good a match for me is the character I’ve made? Comments?

Most of the more enthusiastic web developers worry me. In their wild-eyed enthusiasm for the latest, coolest technology they seem almost oblivious to wider or longer-term implications. Nick Bradbury, creator of FeedDemon, a popular RSS reader for Windows, had an interesting take on this recently.

Back in 2004, I asked: “What are we actually building here? A lot of people in my profession wear rose-colored glasses and believe we’re helping to make information free to the world, but some of the early proponents of television believed the same thing. Are we really just building the next version of TV, one even more powerful because it knows your name and shopping habits?”

I thought I was being cynical then, but now I’m not so sure. Google continues to carve out a huge share of the Internet advertising market, in large part by figuring out what we’re paying attention to. The quality of the content doesn’t really matter to them — only the number of eyeballs they can advertise to does. Sounds a lot like commercial TV, doesn’t it?

So far, has the Web been better than TV, or just more targeted? And is it really worth giving up so much privacy in order to get it?

One of the biggest changes facing society right now is a massive loss of individual privacy. And one of the best introductions to the issues is Simson Garfinkel’s book Database Nation.

Garfinkel is a leading researcher in computer forensics, so he’s well aware that “privacy on the Internet” isn’t really about your email address being used to send you spam — despite that being the focus of most website privacy statements.

As he says in Database Nation:

Actually, you could argue that privacy has already been lost — we just don’t realise it yet.

It’s now impossible to drive anonymously across the Sydney Harbour Bridge. Every mobile phone is a tracking device. Every web page you look at is logged by your Internet service provider. And a generation is recording every little detail of their lives in LiveJournal or MySpace or Facebook or whatever social media website will make all those look so last week.

My take on this?

Society will have to come to terms with the fact that everyone has skeletons in the cupboard — that joint they smoked, for instance. Roughly 1 in 7 of the men listed on birth certificates isn’t actually the father — but now routine DNA screening for diseases is uncovering uncomfortable bedroom secrets.

Many “bad” things are really quite common — they’re just not talked about. Our private worlds remain private. Or at least they used to.

We’ll have to get used to the idea that politicians, teachers, bus drivers — whoever! — are all flawed humans. We can’t ban those who smoked a joint or has “a history of mental illness” (depression affects 800,000 Australian adults a year) or committed a crime (copyright infringement is now a crime, you know) or there’ll be no-one left!

So long-term we might get a more tolerant society, with a more reality-based view of the world.

However in the shorter term I can see a decrease in tolerance. As new technologies reveal more of our hidden private worlds, people will be shocked to discover “all these criminals” and so on, and there’ll be a crackdown.

It could be an uncomfortable few decades. 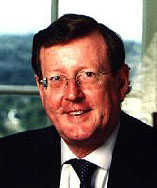 Apparently I look like David Trimble (pictured right), the Northern Ireland politician and joint winner of the 1998 Nobel Peace prize. Well, 67% like him anyway, according to face recognition website MyHeritage.com.

Here’s the deal. You give them your photo, they match it against their database of celebrities and pick the closest. And in return, they get to test their face recognition software — and along the way build up a database of over a million faces (so far) matched to names and email addresses and family connections. Neat eh?

And 53% like Boris Karloff, which doesn’t thrill me at all.

END_OF_DOCUMENT_TOKEN_TO_BE_REPLACED

Information security expert Bruce Schneier looks at the Future of Privacy in this article from his Crypto-Gram Newsletter.

The pervasiveness of computers has resulted in the almost constant surveillance of everyone, with profound implications for our society and our freedoms. Corporations and the police are both using this new trove of surveillance data. We as a society need to understand the technological trends and discuss their implications. If we ignore the problem and leave it to the “market,” we’ll all find that we have almost no privacy left…

Bruce writes coherently — and presumably knows more than we know he knows. His books are well worth a read too.