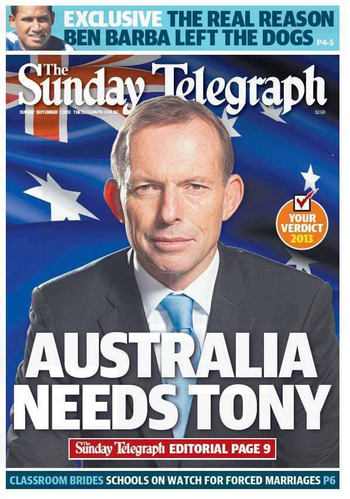 There’s plenty of feels clogging the intertubes this morning about the front page of Sydney’s Sunday Telegraph (pictured). “AUSTRALIA NEEDS TONY,” it says. Oh this is so terrible! It’s a threat to democracy, whaaa whaaa whaaaaaa!

No, kids, look at it more closely. This is a picture of democracy. Suck it up.

Or, if you don’t like it, stop your whining, get off your arse, and do something about it.

Sure, the Murdoch newspapers’ ability to endorse a particular candidate on their front pages, effectively plastering a party-political poster onto newsagents and breakfast tables across the nation, gives that candidate a huge advantage.

Sure, if you don’t want that candidate to win, then this is a bit of a blow to your dreams.

But how about thinking through the implications of what you’re actually suggesting before you spend the whole day whining about how “undemocratic” this is?

For a start, why do you imagine that this, Murdoch’s alleged influence, is why Labor can’t win? Have you not considered that Labor itself has some sort of role to play in the process? By all accounts, they’ve been playing a pretty shit game. But that’s not really what we’re talking about here.

As Mark Newton tweeted a short time ago, your argument seems to be “All we need to do is reduce Murdoch’s influence and ALP will win.” That’s (a) antidemocratic, and (b) magical thinking.

“Let’s adjust media censorship laws specifically to improve the chances of my favourite candidate winning, because democracy,” he said.

You seem to be assuming that, despite the hundreds or thousands of people involved in the production of these newspapers and other media operations, they represent solely the opinion of one man, and him alone. You seem to discount the happy participation of all the others.

And even if it were solely Murdoch’s opinion, you seem to be wanting to remove his right to free speech because his opinion is different from yours, and you’re jealous because more people read his opinion that yours.

Do you really think that expressing opinions is some zero-sum game? That because Murdoch, or anyone else, has loudly expressed their opinion, that you’re somehow silenced? Then you’re an idiot. Stop whining, start influencing. And don’t whinge that Murdoch has so much power that it’s unfair and you can’t catch up, because I’m pretty sure Murdoch didn’t create his media empire by whining.

Sure, he had a head start, inheriting a ratty little provincial afternoon tabloid called The News. But you’ve got the internet at your fingertips, you can start organising, and try to counter the opinion you don’t like — because persuading and organising is precisely what politics is about, and in a democracy anyone can play.

Oh? That’s all too hard? Waaa! That’ll take ages. Waaa waaa waaaaaa! You just want to rub your tummy and have the Magic Democracy Fairy appear in a burst of sparkly how-to-vote cards and fix it all for you?

OK, let’s do that. Let’s have the Magic Democracy Fairy take away Murdoch’s influence. “Poof!”, it goes. Now what? Who’s next down the line? Take away their freedom of speech too? And the next? And the next one after that?

In terms of someone’s perceived influence being greater than yours, just how small must the margin be before you’ll allow them their freedom to express a view different from your own? Clearly-stated policies, or GTFO.

[Note to the hard of thinking: If you think this is somehow written in support of Tony Abbott, you really are an arsehat.]