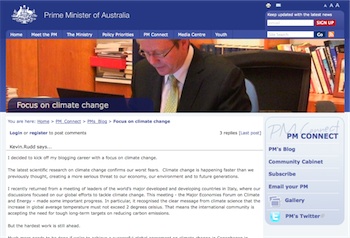 [Recently I was interviewed by Tom Connell, a journalism student at RMIT University, about the future of newspapers. Here’s his resulting feature article. I haven’t edited it, apart from imposing my own idiosyncratic typographical pedantry and linky goodness. You read it now, and I’ll add my own comments tonight. It’s long, but I think it outlines the key issues rather well.]

Newspapers are folding in the United States at an astonishing rate. According to Paper Cuts, a website tracking the newspaper industry, more than 120 have folded since January, 2008. While Australian broadsheets have not succumbed just yet, there is a real possibility that they may not survive in the long-term. But is that such a bad thing? Tom Connell reports.

Mark Scott’s recent comments about the Australian newspaper industry would have sent chills through journalists and editors across the country.

“It does strike me that much of the bold and creative thinking about the future of print seems to be happening outside the major publishers — probably because the talented people within are too busy simply attending to the fire in the building,” Scott said, in and article in The Age on 9 April.

This was hardly the first doomsday article on newspapers, but what set this apart is that Scott, current head of the ABC, was until 2006 a newspaper executive at Fairfax Media –- the second largest newspaper owner in Australia.