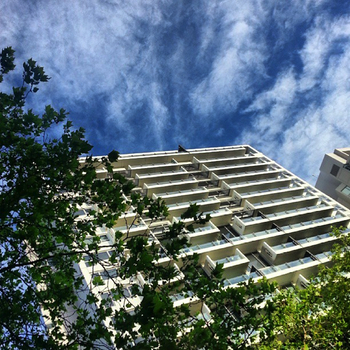 So here’s my week Monday 16 to Sunday 22 September 2013, with just the media stuff listed because this is being posted so late.

[Photo: Spring, Wednesday edition, being the start of a glorious spring day photographed at Potts Point, Sydney, on Wednesday 18 September 2013.]

[Note: This is a slightly edited version of an article I wrote for Crikey this morning. The main difference is a bit more linkage. There’s more CeBIT / Transaction 2.0 material to come.]

In 1980 futurist Alvin Toffler wrote The Third Wave. Following the Agricultural and Industrial Revolutions, he said, we’re now experiencing the Third Wave, or what might be called post-industrial society. Australia’s surfing prowess means nothing here, though. We’re still pissing in the shallows, barely held up by leaking floaties.

Why is tech-literate, well-educated Australia so bad at marketing and profiting from its own innovation, from the fisheye lens to gene shears? We do innovate, you know.

“Australians expect the government to do everything for them — but the government’s clueless,” explained journalist and evangelist Duncan Riley at yesterday’s Transaction 2.0 conference. “The Australia 2020 Summit is a classic example. The Internet was seen as an ’emerging’ industry. Emerging? We’ve had it for 20 years! In the US alone it employs 7 million people.”