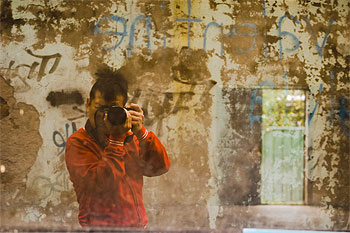 ’Pong has combined his penchant for photographs of reflections with a self-portrait to head his latest post, Moments in 2007.

For him, 2007 was a year where he overcame some of the pressures of depression to achieve highlights such as a prize-winning image.

As I’ve said before in a post about privacy, depression hits 800,000 Australians every year and yet we try to pretend this epidemic and its effects don’t exist. Just pop another SSRI.

Small-minded politicians introduce legislation like WorkChoices in the name of “productivity”. Yet by disrupting routine family time and increasing individual stress they produce a shell-shocked workforce that’s less productive.

’Pong has the good fortune to have a day-job employer who has a more sophisticated worldview. When WorkChoices was introduced he told me “Why would I want to treat my staff so badly? I want to keep the good people!”

If a workplace produced physical illness as debilitating as depression, the proprietors would be paying compensation for decades — if they weren’t jailed for criminal negligence. But somehow it’s OK to destroy people’s minds. This has to end.

Depression is a normal human reaction to abnormal conditions. We’ve produced an abnormal society where in any given year nearly 1 in 20 of us suffers from its effects just in this way, let alone what others. Yes, this has to end.

Those TV ads for the Workplace Authority don’t work, do they? They’re another “official government reassurance” — so of course we don’t believe them.

“You can call (the) Ombudsman but you have already lost a house, your job… You are living on the street with your kids,” one respondent said. “Six years later you may get a reply.”

And who are the people in the ad? Barbara Bennett strides around comfortably — apparently she’s a public servant who’s risen quickly through the ranks. But key jobs like “General Manager Contact Centre” and “Chief Financial Officer” were only advertised in the papers on the weekend.

And why is the General Manager Contact Centre, who oversees just 180 staff, being offered $220k per annum, when this survey of call centre salaries (44k PDF) shows that the current range is $70k to $160k, with a median of $120k?