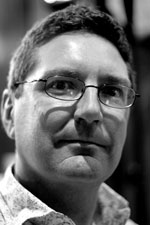 As the header on this website once said, I live in Sydney and do “media stuff”. And right now I run an Internet and IT business called Prussia.Net. But I’m planning to do more media work again — stay tuned for details.

But there’s much more…

Originally I’m from South Australia. I was born in Gawler, just north of Adelaide, but spent the first decade of my life on a dairy farm about 60km south of Adelaide at Mount Compass — a town whose only claims to fame are that it holds a cow race every year and that it’s half way to places you might want to visit if everywhere else was closed.

I’ve been doing freelance things ever since, mostly with the IT and Internet business which evolved into Prussia.Net, but also some corporate media work for little family businesses like Telstra and IBM. I’ll post more about all that in due course.

OK, I’m a workaholic. But when I’m not working I share my home in Enmore in the inner west of Sydney with a most wonderful man who takes excellent photographs and two annoying but oh-so-cute cats. I read when I can find the time — mostly magazines, non-fiction books and cyberpunk novels — and dabble in photography.

I love good food and wine, to the detriment of my waistline, but hopefully a couple sessions at the gym each week will help.

And I guess the rest will emerge as this blog unfolds…

Oh yes, I only have one name — a given name “Stilgherrian” with no surname. Yes, there’s a story there, but I’ll tell that another time. It’s not all that interesting.

What have I left out? Please add it in the Comments!

[Comments on this page are now closed. However you can add comments to the current version of About Stilgherrian. Main photo: ©2007 Roger Bishop.]