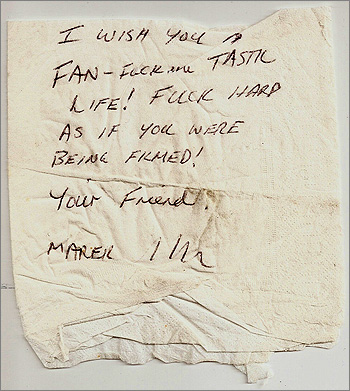 This note, scribbled on a piece of tissue paper, was found lying in the gutter outside a house where someone had obviously just moved out.

The text reads: “I wish you a fan-fucking-tastic life! Fuck hard as if you were being filmed! Your friend, Marek.”

Now this little piece of Found Art has been sitting in my files for at least a couple of years, so I wonder whether Marek’s friend has indeed had a fan-fucking-tastic life?

I also wonder why being filmed would make you more likely to “fuck hard” — and I’m assuming here that fucking “hard” is considered to be an improvement over any other kind of fucking. Personally, I suspect I’d find the presence of the camera to interfere with my confident enjoyment of the process and lead to performance anxiety — but maybe that’s just me.

And now, the fear sets in: what sorts of comments am I going to get on this post?

It’s been a while since I posted the first Found Art object. I’ll try to choose one from the files more regularly.

As everyone pours their personal lives into Facebook et al, what happens to it? Some companies reckon they own it all. Others reckon they can change the rules at any time, and just tell you afterwards.

Alec Saunders has proposed a Privacy Manifesto for the Web 2.0 Era (and you can follow that link for some discussion of the why):

A new semi-regular feature, Gentle Readers. Found Art. Objects which I’ve stumbled across in the street.

Today, a Returned Property Docket from the NSW Police Service. It records in detail (and fairly poor typing) exactly what was being carried by S– when he was detained at the Newtown police station, and which was subsequently returned at 2.24am on a Saturday morning.

A life, in summary.

Don’t worry, S–, I’ve shredded the original. Though if you were concerned about your privacy you wouldn’t have thrown it into the street.