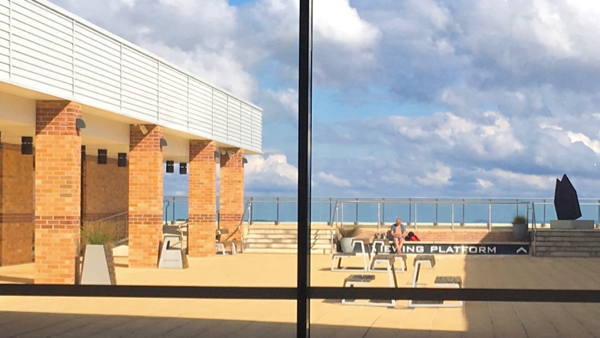 “Is A Billionaire Former Scientologist Shaping Sydney Harbour Into A Giant Gambling Den?”, asked the headline in an email this morning from The Global Mail. Is he? Let’s see!

The story in TGM, the philanthropic media project of Graeme Wood, also a key investor in The Guardian’s forthcoming Australian edition, is obviously about plans by James Packer to build a casino at Sydney’s Barangaroo development.

The proposal is controversial, certainly. But Sydney Harbour becoming a “giant gambling den”? FFS! If it’s not immediately obvious why this is complete bullshit, I’ve drawn a picture for you. A special kind of picture called a “map”.

The black bit is Sydney Harbour, traced from Google Maps. The red bit is the entire proposed casino complex, assuming this report in the Sydney Morning Herald is still roughly correct. You might have to click through to the full-size map to see the red bit.

Sydney Harbour is clearly not becoming a “giant gambling den”. Sydney Harbour will be changed in a way that will be barely noticeable, at least if your global perspective manages to make it any further west than Glebe Point Road. And I’d have thought that the intelligent, well-educated people at TGM would be able to figure that out for themselves.

We were told that The Global Mail was about “quality journalism”, but apparently it’s just another in a long series of comfortable colour supplements for Sydney’s whining middle class, with bonus points for waving the good ol’ Scientology scare-stick.

The story itself is by Nick Bryant, whose work I like. He’s got a biography of Packer coming out, so I assume the article — which I haven’t read yet — is an extract from that book and somewhat better than the promotion it’s been burdened with suggests. I’ll let you know once I’ve read it.

END_OF_DOCUMENT_TOKEN_TO_BE_REPLACED

This morning I finally received a letter (pictured) telling me that I hadn’t been selected for the Australia 2020 Summit. Gosh. I’d already figured that out from not being on the published lists of those who were going.

Apart from the rather late arrival of the news and the traditional passive-voice bureaucratic writing style, there’s two interesting points about this letter.

I really am trying to find good-news stories about the Summit, I really am…

We’ve just officially joined the middle classes — we’ve hired a cleaner for the house. Although you could argue that I did this a while ago when I became an employer.