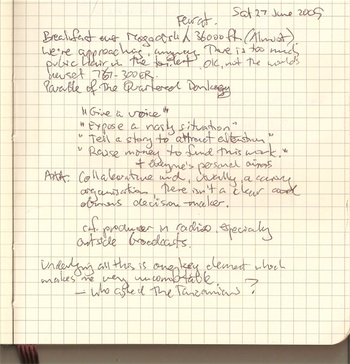 END_OF_DOCUMENT_TOKEN_TO_BE_REPLACED

[Update 28 May 2008: This post began as an announcement of my Project TOTO trip to Tanzania. But a comment by Archie Law triggered a fascinating and wide-ranging discussion about whether topless garden gnome Gnaomi is a harmless presence in my videos or degrading to women. I responded on 27 May in Look, about that damn topless gnome… Do feel free to continue the conversation.]

If you’ve been following my Twitter stream or read a certain recent blog post, you’ll know that a SEKRIT mission was being plotted. Tonight I can reveal… Project TOTO.

Late this afternoon I received my first briefing note, and it’s reproduced in full over the jump. However in summary, it appears that I’m going to Tanzania on behalf of ActionAid Australia (from 1 June, that’s the new name of Austcare) to report on what I see, and to establish a blog outpost in the local community.

Amongst other things, I’ll be posting daily video diaries. Here’s the first.

(If the video doesn’t work, try directly at Viddler.)

As you see, I’m only just starting to get my head around this. I’ve never been to Africa, and certainly not to the kinds of places that ActionAid operates. That’s challenging enough — except that I also have to set up a training program for people I’ve never met from a culture I’ve never encountered.

And deliver “media product” from locations where… well, where Internet bandwidth might not be as plentiful as I’m used to.

My head is exploding.