Time for a quick update on my movements. As I write this, I’m on a train returning from the Blue Mountains to Sydney, where I’ll be spending Saturday night. I’m then on the Gold Coast for the Kickstart Forum from Sunday 27 February to Tuesday 2 March, then back in Sydney for a few days to attend, amongst other things, Digital Directions 2011 [nee Media 2011] on Thursday 3 March. It’s then Mardi Gras weekend in Sydney, so I’ll probably escape back to the Blue Mountains. More details soon, or via my Twitter stream.

I’ve just discovered that ’Pong and I are going to the showing of Mardi Gras: The Slide Show tonight. Presumably like last year it’ll also be an awards night. Maybe like last year one of his photos will win an award. I guess he hopes there won’t be a repeat of The Rowdy Boys Incident. It’s at Midnight Shift nightclub on Oxford Street from 8pm — ho hum, Oxford Street on a Saturday night. I guess it can’t be avoided. And which twit scheduled a slide show during Earth Hour?

’Pong has just published a lovely photo series, 69 Blankets, documenting the diversity of picnic blankets at Mardi Gras Fair Day the other weekend. See them all as a slideshow with music.

Tomorrow afternoon I’ll find myself at an event called Putting The Penis Into Envy, On The Couch With Sigmund Freud. “Sigmund Freud is synonymous with sexuality — penis envy, mother love, the Oedipus Complex, therapy for heavens sake! In the Gothic splendour of the Nicholson Museum and an informal champagne cream tea, a panel in the field will discuss gay issues raised by the work of Freud. An exhibition from the Freud Museum in London displays antiquities that surrounded and influenced the man.” Hosted by Marc Pesce, of all people. Wanna join me? 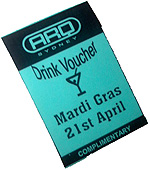