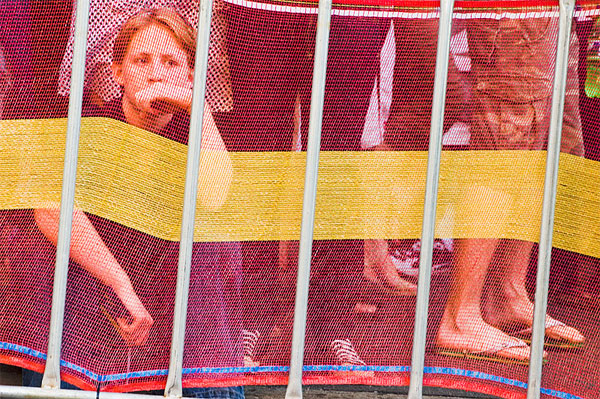 What a night! ’Pong wins a prize with implications far beyond its monetary value, we experience a fantastic seafood restaurant we’d previously ignored, and… well… I’ll tell you about The Rowdy Boys Incident in another post.

One of ’Pong’s images from Mardi Gras: The Slide Show (above) was judged “Best use of the medium” by Robert McFarlane, photography critic for the Sydney Morning Herald — a prize given for the work which best represented that which can only be conveyed through photography. [Update: Actually, it was another, very similar photo.]

McFarlane is a distinguished photographer in his own right, so while the field of contestants was small, this is a great honour. The prize pack was kinda nice too, including subscriptions to art & design magazine Lino and an iPod Nano.

But the highlight was ’Pong’s conversation with Dr Dick Quan (pictured at right) who, apart from being a decent GP, is a passionate collector of contemporary Australian and Asian art and, according to the art life, a tireless proselytizer of new talent and new forms and one of Sydney’s most influential visual arts people.

Dick — I’ll use his first name because I’ve known him as a GP for years — said ’Pong’s work is “sensational”, and he’d only chosen another photographer’s work as “most collectable” because he knew ’Pong would win something else. They’ll be talking further soon. The word “exhibition” was mentioned. Given Dick’s connections this can only be A Good Thing.

Expect to hear more about this over the coming weeks.

Not everyone was a fan, though. As ’Pong received his prize, the photo was projected on the big screen. A girl standing nearby blurted out in bogan tones, “Gawd what did that picture win for?”

I think she’s what you’d call a pictorial literalist.

[Update 23 April 2007: ’Pong’s write-up of the night is online now too. What’s really scary is that without comparing notes we both manage to start with the words “What a night!”]