The winter series of The 9pm Edict continues with another very special guest, satirist Mark Humphries. We met up on Bastille Day. We retreated to an upstairs bar. This delightfully rambling conversation was the result.

END_OF_DOCUMENT_TOKEN_TO_BE_REPLACED

It’s the last day of spring so it’s time for the final episode of the Edict‘s Spring Series. Our special guest is the marvellous Alex Lee, TV writer, actor, comedian, Dragon Friend, and creator of comedy on SBS TV’s The Feed.

END_OF_DOCUMENT_TOKEN_TO_BE_REPLACED

My project to resurrect The 9pm Edict reached the initial target on Saturday — thank you — but there’s a few minutes left, so I’m hoping that we might get something up beyond that. 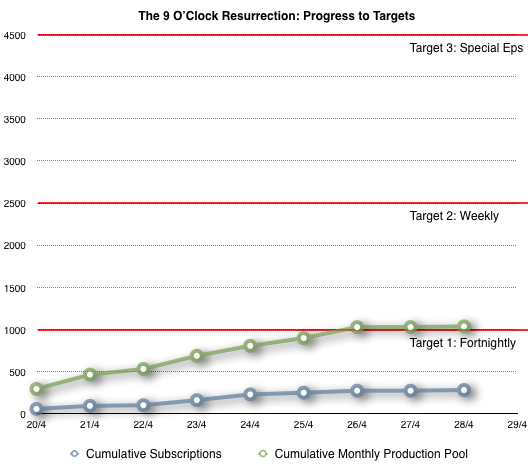 The upper line shows the total commitments so far, and where that line ends up at 0847 AEST today will determine what happens in May.

The lower line shows just the cumulative subscriptions, and where that ends up will provide the starting-point for crowdfunding June’s budget.

I’ll run another Pozible campaign around the third week of May, probably ending around 21 May. That will set the production pool for June — that is, the subscriptions continuing from this campaign, plus any new subscriptions, plus any one-off pledges. However I’ll also be investigating other ways to organise the subscriptions and perhaps some commercial sponsorship.

Meanwhile you can watch my daily progress videos, which ceased on the weekend because I was distracted by a computer rebuild.

[Update 1110 AEST: The final total raised for the May production pool was $1082, so that’s two episodes confirmed for the month. We “only” have $304 in ongoing subscriptions, which isn’t quite enough to fund podcasts in June — yet. There will be further fundraising before then, so stay tuned. I’m currently feeling quite confident that I can build on this base — but I’ll have more on that tonight.]

My project to resurrect The 9pm Edict has reached the halfway mark on its way to the initial target — but comments from some supporters have led me to believe that I need to better explain the funding model.

I’m establishing a monthly funding, planning and production cycle for the podcast.

The current Pozible project is the first of what will be continuing monthly fundraising campaigns. When it ends on 29 April, I’ll know how much money is in the production pool for May — that’s all the one-off contributions plus the first month of the subscriptions. I’ll then be able to lock in the production schedule for that month.

END_OF_DOCUMENT_TOKEN_TO_BE_REPLACED 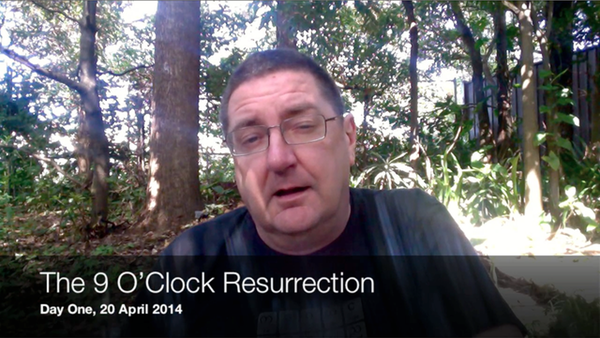 I’ve decided that my podcast The 9pm Edict should be a thing again, and so yesterday morning I launched a Pozible crowdfunding campaign entitled The 9 O’Clock Resurrection to make it happen.

This post is “belatedly” because it’s already more than a day since I launched the campaign, and already people’s commitments are more than a third of the way to the initial target, which is to fund two episodes in May. Thank you.

I’d really like to do the podcast weekly, however, and beyond May. So that’ll mean more funding than the initial target, and more of the supporters to commit to a monthly subscription. It’s much the same model as that used by community broadcasters here in Australia, or public broadcasters in the US, as I said when I spoke about my first Pozible campaign on ABC Radio National’s Media Report.

This new Pozible campaign runs until 29 April. I’ll be making a video each day to report progress. The first is watchable on YouTube, and the rest will appear in the YouTube playlist, and I’ll figure out some other methods tomorrow.