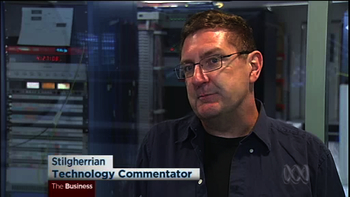 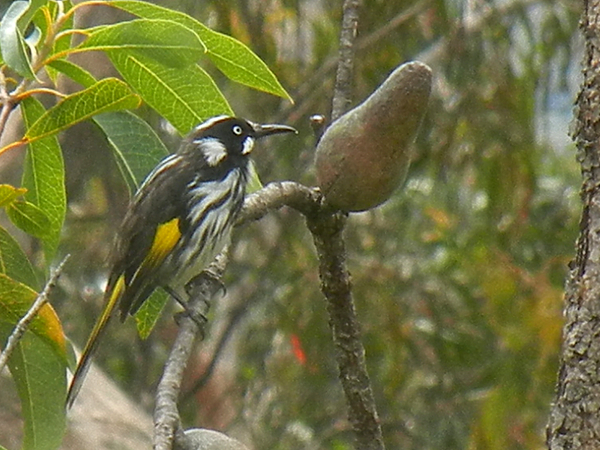 My usual weekly summary of what I’ve been doing elsewhere on the internets. This post covers the week from Monday 2 to Sunday 8 April 2012.

T’was a short week in terms of writing and media production because it was the 4-day work week prior to Easter, I spend about 10 hours judging entries in the Lizzies, the Australian IT journalism awards — the finalists have now been announced, and the awards night is on 20 April — three and a half hours troubleshooting the ADSL connection at Bunjaree Cottages, and two hours restoring a website that a new developer had accidentally taken offline.

There was also a mysterious pump.

I’m in Sydney all this week, and the main blocks of work are a Patch Monday podcast to be posted on Tuesday and a 2000-word feature for ZDNet Australia. I daresay other stuff will turn up as well, but let’s focus on one stressor at a time.

[Photo: New Holland Honeyeater (Phylidonyris novaehollandiae), a daily visitor to Rosella Cottage but a bugger to photograph because they move so fast.]

Apparently the old “Fidel Castro is dead” hoax spam is doing the rounds again. I daresay the bad guys are targetting people during the holiday season when they’re less vigilant and don’t have as much work email to distract them from the spam.

I spoke about this with Matt Parkinson on ABC 774 Melbourne this morning. It’s the usual message. This stuff is common. Scammers act quickly. The aim is to infect your computer and steal your money. I continue to be surprised that most radio presenters seem completely oblivious to what goes on online.

There’s also the now-common ABC glitch of hedging the way they introduce my name. I’ll have to put a stop to that.

The audio is ©2012 Australian Broadcasting Corporation, but it usually isn’t posted on their website and I don’t get paid for these spots, so here it is. 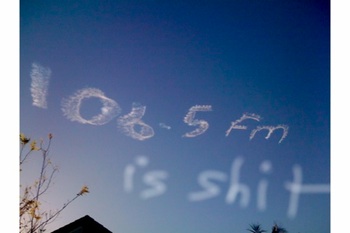 Last night I gave one hell of a serve to The Online Circle, a “full-service interactive agency” who I accused of… well… read it for yourself. Today their CEO Jeff Richardson emailed an apology, and I reckon he’s more than made good. Bravo.

I’ve always said that the true measure of a business is how it responds when something goes wrong. Too many try to cover the cracks with bullshit — I’m sure you know the kind of hollow corporate PR-speak I mean. It takes integrity and, indeed, guts to respond directly to criticism, particularly when it was a direct and as harsh as mine.

Mr Richardson, Sir, it takes a solid effort to write an email like yours, which I thoroughly appreciate, and of course I accept the apology.

END_OF_DOCUMENT_TOKEN_TO_BE_REPLACED

[Update 8 June 2010: The Online Circle’s CEO Jeff Richardson emailed an apology and explanation today. I think it’s a superb response, dignified yet accepting the very harsh criticism I served out. I’m impressed. And of course I accept the apology. So do bear that in mind as you read this rant. — Stilgherrian]

Speaking personally, I wouldn’t trust a “full-service interactive agency” that can’t even get the basics of the Spam Act 2003 right. So here’s my Big Fat Monday Night Hello to The Online Circle, the arsehats who just spammed me.

Guys, here’s how your email starts:

Firstly, thank you very much for your effort and involvement in our [redacted] campaign (We hope you enjoyed the chocolate). We saw some great blog articles and Twitter updates written that have really helped people understand more about [redacted] and why we all should get involved.

Oh, and that sentence in parentheses? The full stop should be inside the closing parenthesis. That’s #3.

I’ll skip over the plug for your “we’re excited to announce” thing because — and OMFG how original is this? — you’re inviting people to upload videos to promote your client’s product! A video competition! How unique is that?

“Not at all,” is my answer there. Video competitions have to be the most overworked cliché in social media marketing.

But here are the bits which really shit me.

You are receiving this email because The Online Circle has found you to be an online influencer in Australia. This is our first contact with you and we promise not to share your name or any details with anyone.

An “online influencer”, eh? So it’s not that I’m an “interesting writer” or “respected commentator” or “glutton for chocolate” or even just “nice guy” or perhaps even “dangerous psychotic” — but an “online influencer”. Great. I fit some smegging buzzword du jour category for your marketing effort. T’riffic. How depersonalising.

“This is our first contact with you,” you say?

You previously emailed me on 24 February, subject line “Social Media Influencer — How about free samples?”, to say that you “understand generating content for your blogs and social media channels can sometimes be challenging”. No, I don’t “generate content”. I write. I take photos sometimes.

And you emailed me again on 1 March, subject line “We are ready to send you some free chocolate”, with the same content.

All three emails claim “This is our first contact with you”. Liars.

And if you’d bothered to even look at my website…

… as opposed to, I presume, just finding me on some list of Australian bloggers somewhere, you might even have discovered that I don’t fill my website with random plugs for multinational corporations. Especially corporations that pull more than USD 7 billion a year in revenue but still want the punters to do their creative work for them in exchange for a few chocolates.