By tonight I’ll be exhausted after 3 days of geekery. If the nice long cough I just had is any indication, I’ll be feeling ratty for other reasons too. Nevertheless, episode 3 of Stilgherrian Live Alpha will be on the Internet at 9.30pm Sydney time — no matter how ill-prepared, no matter how ill. I suspect that the worse I feel, the snarkier I’ll get. There will also be embarrassing videos.

I recently saw myself described as an ‘overrated misanthropic pot monster.’ I liked that so much I’m thinking of getting a tee shirt printed. It made me think of [writing a column] on the topic of media tags, you know — adjective adjective noun. But I couldn’t get four hundred words out of it. So I thought I’d throw it out here. Invent your own degrading media tag.

I like the challenge. I haven’t thought up one for him. But I’m wondering… What would be a good “degrading media designation” for me? And, for that matter, for the Prime Minister?

(On the latter, “lying rodent” doesn’t count. It has to have two adjectives. Even though a Google search on “lying rodent” gives you… well, look for yourself.)

With no time or inspiration for my own creativity today, I thought I’d just point to someone else’s rantings. But I can’t pick! Which of these best fits the mood of the day? 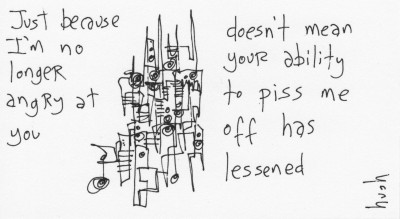 As background, I should mention that Sydney had 50mm of rain last night, it’s cold, there’s now a slight leak in the office ceiling and I’m tired.

If you ever thought that I was snarky and sarcastic, try this post from Yeast Radio. Beware, there are naughty words.

I’ve just come back from Webjam 3, so this may explain my direct language. But I’ve just posted the following at London 2012, which won’t be published either:

You spineless turds! If you’re going to have a blog and ask for comments and pretend to be “with it with the hip young folk on the Internet”, at least have the intestinal fortitude to face the reality of those comments. Particularly when we go to the bother of giving you our names and email addresses and are prepared to stand behind our words. Or even just send a boilerplate email to acknowledge us.

London 2012 didn’t publish either of my comments, and probably won’t publish this one either. Here’s what they said instead:

We have received many comments that reflect the tenor of negative comments found elsewhere on the web. Rather than act as an echo chamber we have published a selection here that say something a little different.

“A little different” as in “Off in some fantasy land where people actually think your branding is good.”

Guys, at this point you really only have two options:

I reckon “credible reasons” could include “We don’t have the budget to re-do it” or “There isn’t time”. Hey, we understand. Time marches on, this is what we’ve got to work with, it’s not ideal, but hey, shit happens… We’ve all been there, and we sympathise. It’s a cop-out and your branding is still shite but, yeah, we know, snafu.

But if you expect us to give you any respect at all, at least be honest. Have someone put their name to this and fix it. One way or the other.