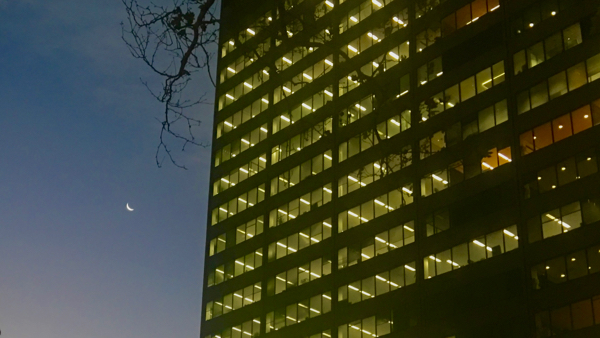 My week Monday 6 to Sunday 12 June 2016 ended a week ago, for reasons that will become clear in the next Weekly Wrap.

[Photo: Office with Moon, being the Moon as seen between office buildings in Haymarket, Sydney, on 8 June 2016.] My week Monday 22 to Sunday 28 July 2013 was initially as unproductive as the previous two, but Thursday marked a turning-point. Thank the gods. No details.

None, but I did plenty of behind-the-scenes work on the Corrupted Nerds website, including settling on Cryout Creations’ Mantra theme for WordPress as the design framework.

This fixed a very, very annoying bug that I’d encountered in some other themes that broke the RSS feeds in Blubrry’s PowerPress Podcasting Plugin for WordPress, and that in turn meant that I couldn’t add the podcasts to Apple’s iTunes store.

Having removed that roadblock, I’ll be able to add more material to Corrupted Nerds very soon — including two new episodes in the coming week.

On Monday I’ll complete a catch-up edition of my ZDNet Australia column, The Full Tilt, with something that’ll probably annoy quite a few people who call themselves geeks, and then spending the afternoon in Katoomba. Somewhere in there I’ll fire up that Nokia Lumia 925.

On Tuesday I’ll write a piece for Technology Spectator, one that’s been on the back burner for a while, and completing a new episode of Corrupted Nerds: Conversations podcast. The forecast is for a rainy day, so that’s perfect.

On Wednesday morning I’ll head into Sydney to attend a media event with Vodafone Australia at 1030, then the rest of the week becomes some what flexible — although I know it include a medical appointment in Sydney, another column for ZDNet Australia and some planning.

[Photo: Glimpse of Sydney Central, being a view of the clock tower at Sydney’s Central station, taken early one winter morning from the Metro Sydney Central hotel.]