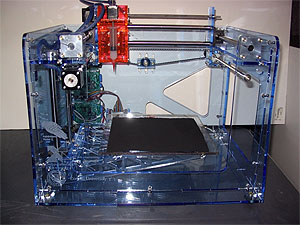 Remember the “replicators” of science fiction? You know, the gadget like a microwave oven where you dialled up “replacement gear wheel” or “9mm pistol” or “vegetarian lasagne” and out it’d pop? That’s what you’re looking at in the photo at right.

This is the Fab@Home Model 1 freeform fabrication system, sort of like an inkjet printer for making 3D objects.

These rapid prototyping (RP) systems have been around for a while, but the Model 1 has two key differences. You can build it yourself for US$2300 of parts you can buy off the shelf. And the plans and software are free.

The people behind Fab@Home reckon the Model 1 will trigger the transformation of the manufacturing and distribution of “hard” items, just like the Altair 8800 kit-built microcomputer of 1975 triggered the real computer revolution.

bq. Universal manufacturing embodied as today’s freeform fabrication systems has — like universal computers — the potential to transform human society to a degree that few creations ever have. The ability to directly fabricate functional custom objects could transform the way we design, make, deliver and consume products. But not less importantly, rapid prototyping technology has the potential to redefine the designer. By eliminating many of the barriers of resource and skill that currently prevent ordinary inventors from realizing their own ideas, fabbers can “democratize innovation”. Ubiquitous automated manufacturing can thus open the door to a new class of independent designers, a marketplace of printable blueprints, and a new economy of custom products. Just like the Internet and MP3s have freed musical talent from control of big labels, so can widespread RP divorce technological innovation from the control of big corporations.

I’m not sure their idealistic vision of “a new class of independent designers” will come to pass, at least not long-term. Most software still comes from cubicle farms. But it _will_ change things.

3 Replies to “Universal Manufacturing to transform the world”