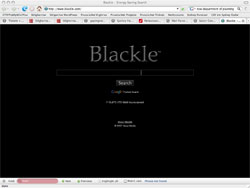 On the surface it sounds great. “A given monitor requires more power to display a white (or light) screen than a black (or dark) screen,” says About Blackle. So if everyone turns Google black we’ll save heaps of energy, because it’s such a widely-used website. At least that’s the theory.

And Sydney-based Heap Media is getting attention because they’ve created Blackle (pictured right), a website which provides that black version of Google.

But as always the devil is in the detail…

Still, it’s a great way of getting attention for your business under the banner of “saving the planet”, eh? Plus, having a black background means your site can have that oh-so-current style of having everything look like it’s reflected in some shiny black surface.