[Update 10 March, 1030 AEDT: I’ve written a follow-up article which, while bound to piss off a few people, explains precisely why I’m so concerned about this issue.]

…but I don’t know whether this was exactly what I had in mind. Calling a high-profile Internet entrepreneur a prick, and then being referenced by some of the highest-traffic tech blogs on the planet. 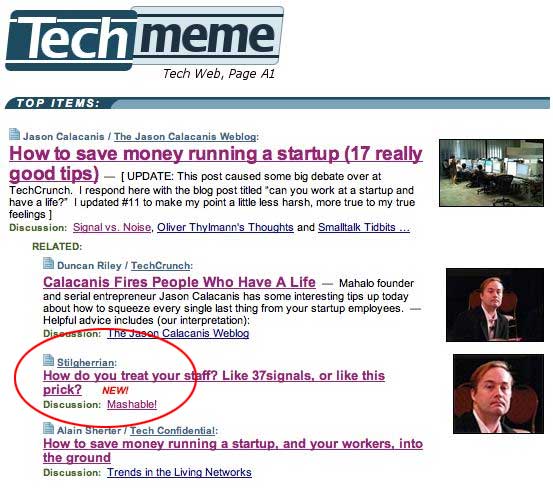 OK, I participated in the discussion at TechCrunch and the 37signals blog Signal vs Noise, as I should. But then it was picked up by Mashable and then TechMeme (see screenshot). And now I’m seeing inbound from TechCrunch Japan and Colbert Low’s technology blog and who knows where else to come.

Jason Calacanis has edited his original post in face of the fallout:

He’s also posted an explanatory piece. My take on that: lots of good words, but in my experience the words that people blurt out first are closest to what they really believe.

If an employer can’t tell the difference between passion and being a workaholic, or if he blurts out critical policies without thinking about the language he’s using and how people might respond, then he’s a dangerous employer. Working the way Calicanis suggests has serious long-term health impacts, and in some places is illegal.

Should I have called Calacanis a “prick”?

I don’t see why not. I’d certainly call him that to his face, if we were discussing this issue. It’s my honest opinion. Sure, I know nothing about him except his writing today and the way he’s responding to the criticism. But hey, I figure both he and I have been in the public media space for a long time and we’re both used to worse.

However he wants to smudge it over after the fact, what Calicanis said was that he’d only employ people who work in conditions which are dangerous to their health. I’m certainly glad he doesn’t have kids, ‘cos he’d probably have them in the coal mines by age 5.