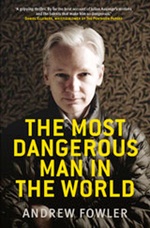 Warning! I bought Andrew Fowler’s biography of WikiLeaks front man Julian Assange, The Most Dangerous Man in the World, ‘cos it’s a bestseller with good reviews. But just 41 pages in, I’m feeling like I’ve done my dough.

If I’m paying money for a book — especially when it’s written by someone billed as an “award-winning investigative journalist” and published by a prestigious imprint like Melbourne University Press — I have two basic but very simple requirements. The book should tell me more than I already know. And it shouldn’t tell me things I know to be wrong.

Quite frankly, after the first 41 pages I’m wondering whether MUP had assigned to this book an editor who had the faintest grasp of internet technology, history and culture. Shall we run through some of the problems?

Also on page 11, adding a modem to a computer is described as “transform[ing] it from a machine that mainly played games to a supercharged device”, when of course adding a modem has no effect on a computer’s performance.

On page 15, when Assange breaks into computers at the Australian National University, he’s said to have “cracked the code”. This would perhaps be a reasonable metaphor in more general writing. But cryptography will soon become a key element of this story — or at least it had bloody better — and sloppy writing about cracking codes when no codes have been cracked points to poor editing.

On page 20, NASA’s Galileo spacecraft is described as having “nuclear fuel”. Bzzzt! While this is soon clarified as “plutonium energy canisters”, there’s plenty of ways to describe the potential risk of radioactive contamination without confusing propulsion systems with electrical systems.

On page 21, Galileo’s planned trajectory is described as “pass[ing] very close to the earth before it started on its journey”. Um, it started from Earth. And surely a planet deserves a capital letter.

On page 24, Usenet is referred to as “Usernet”. Twice. Inexcusable. FFS, use Wikipedia if you’re not sure!

On page 27, the Strobe port scanner is described as a “device”. It’s software.

On pages 29 and 30 there’s a comparison of 56-bit DES encryption with 1024-bit PGP. Given that we’ve only just had to explain that “machine code” is “a programming language”, can we really assume that the casual reader will know what a “bit” is, and that they’ll automatically get that N-bit encryption is better for higher values of N? More sloppy editing.

On page 30, Fowler refers to the US government having “trapdoors” into encryption algorithms when he means backdoors. A trapdoor is very different. However I’ll let this one pass, just because Wikipedia notes that trapdoor is an outdated synonym for “backdoor”.

On page 38, the Millennium Bug issue is described as:

… the theory that when the world’s computer clocks registered 000 they would trip all the world’s major servers, crashing the Internet.

FFS! That doesn’t even get the fact that it was about two-digit years! And WTF does “trip all the world’s major servers” even mean?

On page 39, Fowler writes that we can get an insight into Assange’s thinking through “the blog that he wrote called IQ.Org”. Perhaps we can. But IQ.org was already introduced on page 10 and doesn’t need to be explained again. It’s even listed in the index, so didn’t the indexer notice this? More sloppy editing.

Also on page 39, there’s a reference to Assange’s assets, namely the “computer software codes he had written”. Sorry, but in that context “code” is a bulk, uncountable noun, like “flour” or “rain” or “sheep”. Such a slip indicates that Fowler or his editor or both don’t understand the difference between code as in programs and codes as in encryption methods. Fail.

Lisa remembered she’d forgotten to bring any blankets to sleep in. Unperturbed, Assange said: ‘Why don’t we just knock on doors and see if there are any blankets we can have?’ Assange’s ability to get help from strangers was both charmingly naïve and mildly exploitative.

Or, it could indicate his skills at social engineering — a term which, surprisingly, does not appear in the index.

Now I don’t want to lay shit on Andrew Fowler. His bio indicates that he’s a respected journalist. But it’s clear that this time he’s writing about a culture with which he is not familiar. A good editor should have spotted that and pencilled in a bunch of queries to clarify the text.

I’m hoping that when we get to more contemporary material — and Fowler did interview Assange in 2010, for which he deserves kudos — we’ll see new material devoid of such glitches. I’m hoping.

I reckon you’ll get better value from last month’s cover story in The Monthly magazine. Not only does Julian Assange: The Cypherpunk Revolutionary nail the importance of Assange’s cypherpunk connections — which surprises me, because I’d written off author Robert Manne as one of those guys still fighting the same fights he fought when he was a student politician in Melbourne the 1960s — it’s available online for free.