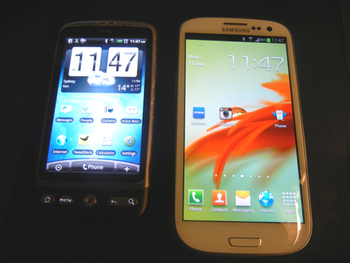 The phone is pleasantly slim and light, but a little too big for comfortable one-handed use.

As I mentioned in the Technology Spectator story, your thumb can’t reach all the way across — at least not without holding the phone in an awkward position from which it’d be easy to drop the thing. I stand by my description of it as a mini-tablet.

It’s also too big for the front pocket of my pants, which is where I usually carry a phone. I’m still not sure how I’ll deal with that.

That’s what happens when you quadruple the number of processor cores, right?

It’s not pre-loaded with too much Samsung shit.

Of course that may change once the telcos start loading it up with their own supposedly must-have apps. Prepare yourself to be disappointed.

SamsungDive, the service that lets you set up remote tracking and wiping of a lost or stolen phone, is broken.

In both Firefox 13.0 and Safari 5.1.7 for OS X, the current versions, it just won’t stay logged in. I suspect it’s something to do with the way cookies are handled between the different Samsung domains, samsung.com and samsungdive.com.

And if you log in to SamsungDive using the phone’s browser, the landing page isn’t even properly rendered: it’s missing the vital “Register your mobile phone now!” button. An average user would have given up long before I did. 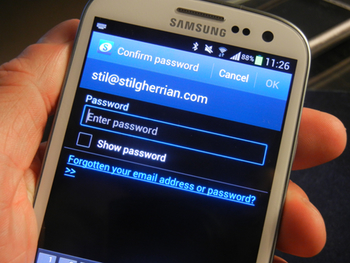 There are user interface problems elsewhere in Samsung’s apps.

As just one example, when logging in with your Samsung account password for the umpteenth time to try to set up the remote wipe, I kept failing to notice that the “OK” button wasn’t below the email address and password fields where you’d expect it to be, but up the top of the screen! Check the picture. I don’t know even.

I found, as expected, the typical Android generalised low-level untidiness that comes from a suite of cool new services being assembled from originally unrelated components.

When you buy Apple, obsessive attention to detail is what you pay for — though it’s a fine line between that and mental illness.

The product registration form doesn’t even include the Galaxy S III as an option yet! Samsung Kies, the tool to upgrade the phone’s firmware via a USB cable, is described as Windows-only in one place but the Galaxy S III support page offers an OS X download too.

And finally, I got the impression that the battery life and the camera are both rather good. I’ll play more with the latter soon.

Overall, though, my emotional reaction to the Galaxy S III is a positive one, but with a tinge of dissatisfaction at the edges thanks to those little inconsistencies. Whether that changes over the next week, and in which direction, remains to be seen.