Nice touch: The latest round of Australian Army recruitment posters were designed by the grunts themselves. This one isn’t the winner, but it’s my personal fave. 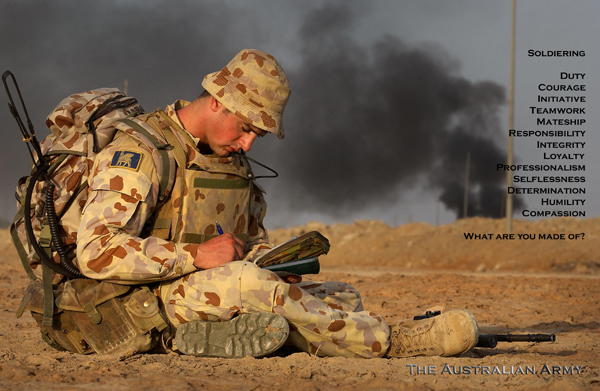 Author John Birmingham provided the pointer, and amongst the various daft comments from his feral fan base there’s a gem, explaining how the ads reveal the current self-image of the typical Australian soldier.

These posters, if their creators are a representative cross section of the Australian Army, indicate the following:

a. A heightened level of pride in what they do and that what they do is right and proper
b. A strong belief that their role is to protect the weak and the helpless, both now and for future generations
c. A belief that their profession is a selfless one calling for people of the highest calibre
d. The feeling that soldiering is an honourable profession, one that carries the mantle of the generations that defeated the Kaiser’s army in the First World War, and defeated horror and tyranny in the Second

All in all, the if this is representative of the Australian Army in particular, and the ADF in general, Australians are a very fortunate people.

For the record, here’s the winner, by Private David Eason of 8 Combat Services Support Battalion. 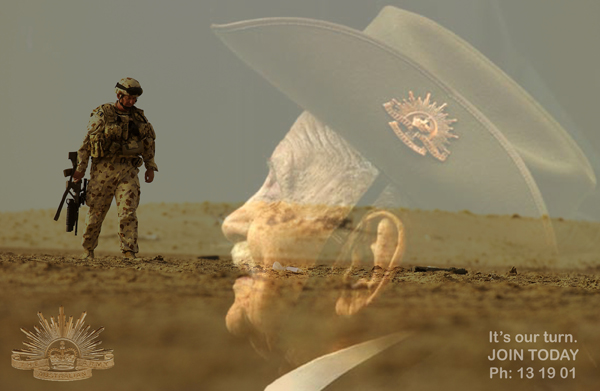 Personally, I reckon it’s a bit too nostalgic… though your tastes may differ. My guess is The Powers That Be loved it in the lead-up to Anzac Day.