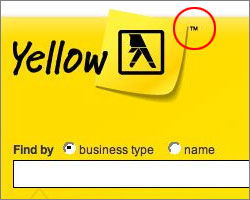 Sensis, the Telstra subsidiary that owns things like the Yellow Pages and Trading Post, has kicked off a legal attack on small websites for “trademark infringement”. Why? Because they haven’t got an ® after every mention of “Yellow Pages”.

Apart from the daftness of attacking little fish, which only makes your company look like a bully, you’ve got to wonder why they’re doing it.

I found out about this yesterday when Professor Roger Clarke posted to the Link mailing list. I’ve become more and more astounded at the stupidity of it all as I’ve read people’s comments…

He points out that the web page in question receives bugger all traffic, and observes:

I find it absolutely extraordinary that [Sensis] would fund a partner in a law firm to waste time and money searching out harmless pages and writing ‘nastygrams’ of this kind — energy that could instead be invested in improvements to the product.

Note that the use of the term on the page is quite general, and there is no evidence of any attempt to appropriate the term, nor to benefit commercially or otherwise from its use, nor to denigrate the IP owner. In fact it promotes your site, and speaks in a complimentary manner about it. Under the circumstances, the letter is not only inappropriate, but oppressive.

Apart from this bullying, it would appear that there aren’t actually grounds for Sensis to complain. According to the Arts Law Centre of Australia (quoting IP Australia, who handle trademark registration)…

To be successful in an infringement action it is necessary to show that:

Professor Clarke’s mention of Yellow Pages doesn’t fit any of those criteria!

In my opinion, and I am not a lawyer, Sensis probably wants to generate consistency in the way people use their product name. But instead of asking nicely, they’re using aggressive, bullying language and implied legal threats. The reaction, naturally enough, is “Screw you!”

I recently moved my landline phone from Telstra to iiNet and bundled it with ADSL2+. A couple of weeks later, a Telstra rep phoned to ask, “Is there anything we can do to get you back?”

My reply was, “No. Because it’s not about the service or the price. It’s because I don’t want to do business with an organisation that’s run by a pack of arseholes. Please make sure that specific message is passed up the line.”

This Sensis attack on small website owners is exactly the sort of thing I’m talking about.

[Update: I’ve just thought of a possible reason. Sensis want to separate “the Yellow Pages Directory” from the Yellow brand, possibly with the aim of offloading the presumably-expensive business of printing phone books which no-one uses any more.]