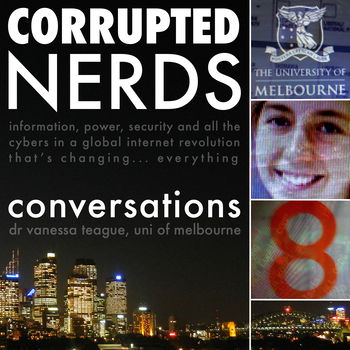 I’ve just posted the first full-length podcast of material recorded on my Melbourne trip, this one being a chat with Dr Vanessa Teague about electronic voting.

Now I’ve always thought that the whole idea of electronic voting is a bit dodgy. You get a little bit of convenience, sure, but you get a whole lot more attack surface for the bad guys to hit — especially if you open up that whole can of worms of internet voting — and you make it almost impossible for anyone but a specialist digital forensics team to confirm that everything was legitimate.

I was willing to have my mind changed, but in fact the opposite happened. I now think more than ever that electronic voting opens up all manner of avenues for attack that would never have been possible before, with little benefit for most people. And it’d cost a squillion.

“There isn’t a secure solution for voting over the internet. There isn’t a good way of authenticating voters, that is, making sure that the person at the other end of the connection is the eligible voter they say they are. There isn’t an easy, usable way of helping voters to make sure that the vote they send is the vote they wanted, even if their PC is infected with malware or administered by somebody who wants to vote differently,” Teague said.

“And although there are some techniques for providing evidence that encrypted votes have been properly decrypted and tallied, it’s hard to scale those techniques to large Australian elections.”

As I said in September, give me my trusty pencil of democracy.

This was also my first podcast with a specific commercial sponsor.