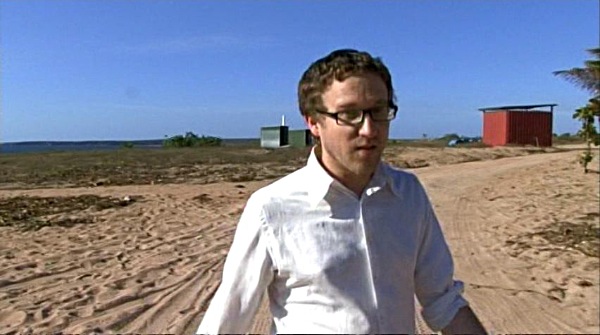 I can’t be “objective” about Marcus Westbury and his truly awesome TV series Not Quite Art. Marcus, I am totally envious and I want to have your babies!

OK, failing that (for various biological and logistical reasons) I’ll simply demand that everyone — and I do mean everyone — watch Not Quite Art when series two is squeezed like a threatening pimple from ABC1’s transmitters across Australia tonight at 10pm. Or ABC2 at 7pm Sunday. Or streamed from ABC iView.

Quite frankly, if you reckon you’re interested in “art” and “culture” and how it’s evolving, then you must consider Marcus’ worldview. If you fail to watch this program, you’re missing out on a delightful, witty and above all intelligent journey.

First, though, I’d better explain why I can’t be “objective” — in quotes because I think this whole “objective” thing about writing reviews and journalism is a crock of shit. We all have our biases and pre-conceived ideas — whether we like them or not, whether we even realise it or not — so we might as well try to put them on the table.

But I’m not cool enough any more.

Back in 1993 I discovered the writing of Neal Stephenson through the pages of Wired magazine. While researching his massive article Mother Earth Mother Board the “hacker tourist”, as he was styled, travelled three continents following the route of the global fibre optic network, writing entertainingly about its history and its impact.

I was jealous. Stephenson had the freedom to spend several months and 42,000 words on something he loved and was paid for it. I wanted to do that! Travel, and write and talk about stuff I’m interested in.

Then last year I read Marcus Westbury’s opinion piece Mozart cover bands rake in the moolah, about how “an overwhelming amount of arts funding in Australia goes to organisations that either exclusively or primarily play covers”.

Think symphony orchestras, opera companies and state theatre companies that produce comparatively little in the way of original, innovative or even Australian work. Like classic hits radio, they are busting out the chart-toppers of the 17th, 18th, 19th and 20th centuries…

[G]rab yourself a copy of the Australia Council’s annual report. The nation’s cover bands, mostly the state-based symphony orchestras, collectively receive just under $50 million each year from the council.

Whether that figure seems average or outrageous would depend on the context that you choose to put it in. The context that I put it in is the $4.8 million pool that every single musician in Australia who isn’t in a symphony orchestra competes for every year. That’s more than a 10-fold disparity between the orchestras and everyone else combined.

Wow! This certainly resonated with my thoughts. And then:

Culture isn’t something that happened in Europe centuries ago that needs preservation. It’s actually all that messy, beautiful, inspiring and wonderful stuff that is happening around us right now. Arts funding should reward innovation not preservation and vibrancy over bureaucracy

I watched Not Quite Art series 1 — which of all the programs the ABC put into that 10pm Tuesday arts timeslot pulled the biggest audience — and I loved this man’s worldview. He trotted around Australia showing us the cool stuff!

So I was well pleased when I pressed “play” on the preview DVD the lovely people at ABC TV sent me and heard these words at the start of Not Quite Art series 2 episode 1, “Culture Shock”:

This is a series about culture. Not just this kind of culture [gesturing to the theatre around him] but the living cultures all around us — the ones that are evolving and changing so rapidly that if you nod off for a little while, well, you just might miss it.

Marcus and his nerdy brown pullover led me on a journey through living cultures including Newcastle-bred DJ Mark Newlands, who referred to “the cave-man era before the Internet” and reminded us that “Technology marches on. Either get with it or get fucked”; video game critic Ben “Yahtze” Croshaw whose program pulls 4 million viewers; animator Paul Robertson, who reaches his global audience from his bedroom; a wonderful woman called Jodi Rose who records the sounds that bridges make; and to a remote part of the Northern Territory (pictured above, where Marcus removes his pullover!) and… well I won’t tell you all the tales.

But then he said something which had me spluttering my coffee and and gasping for breath.

What interests me isn’t the technology, but how it’s changing us.

Damn you, Westbury! I said that! On my About Stilgherrian page! Well, in a few more words…

This little cunt Marcus Westbury is not only thinking my thoughts, he’s getting paid to put them on TV!

So I take it all back! Do not watch this program. It’s a program I’d want to make, if I were still hip and cool and knew people at the bloody ABC. Do not watch Not Quite Art.