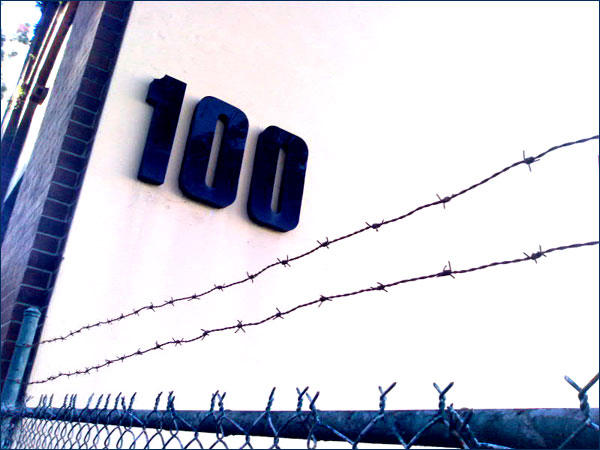 It’s been a while since my last essay. I want to write something substantial tonight. But I can’t choose, and I’m too tired! So here’s 100 Random Thoughts, in order. An essay of some kind, perhaps…?

1. Paul McDermott is a fine TV presenter, and I should watch The Sideshow — even if it is “the usual suspects” from Melbourne.

2. I hesitated just now. Should I write about this one? Yesterday I gave a really dear friend a really hard time — because I thought he was behind the pace in certain things and I expected better. Am I a hard taskmaster? Do I want to reveal it here? No. At least not yet. 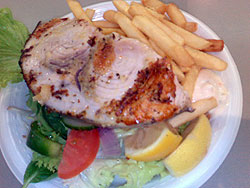 5. I am way, way behind on my writing. Especially my writing about my reading.

6. Shit, I have to put the garbage bins out! Be right back.

7. That swordfish is on a plastic disposable plate. Is that better or worse for The Planet than a “proper” plate that’s washed after use?

8. The “lifestyle” generally aspired to at St Ives really is exactly why this planet is going down the gurgler. Nothing but selfishness from arsehole to breakfast time.

9. Speaking of arseholes, I think Hugh MacLeod has got it right again: 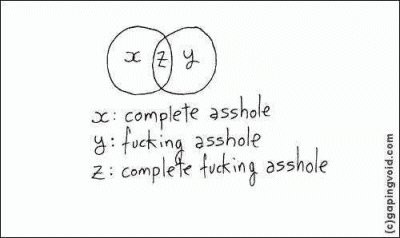 10. That cartoon makes Hugh into a more cynical, less uplifting version of indexed. And rightly so.

11. I’ve been meaning to write the next sentence for about six months now.

12. If I had an iPod shoved in my ears, I’d miss so many beautiful things. The cockatoo strutting and boasting the quality of his crest — but no-one paying attention but me. The teenage drummer in the next street practicing the basics — badly. The strange swirly sound that’s heard about 20 seconds after an airliner passes overhead — is that the vortex they talk about? The chorus of car horns chastising the woman trying to turn right at a “No Right Turn” sign — if I hadn’t heard the horns, I wouldn’t have been able to glare at her and add my own Universally-Understood Gesture of Disapproval. The sounds of a mother struggling with her pram — so I could help her carry it up the stairs.

19. I don’t appear on the Wikipedia list of Triple J announcers. Is that because they’re only listing the national major-shift presenters? Or have I been purged? Is it too vain to add myself, thereby creating my own Wikipedia entry?

23. Do I actually want a Wikipedia page?

25. You cannot truly be an explorer of any kind unless you have a sense of humour. 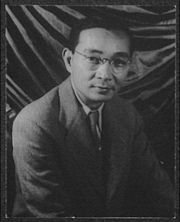 26. There was a long pause between the last two thoughts, because I was flipping through the copy of Lin Yutang‘s The Importance of Living that’s been sitting on my desk.

28. “How many of us are able to distinguish between the odours of noon and midnight, or of winter and summer, or of a windy spell and a still one? If man is so generally less happy in the cities than in the country, it is because all these variations and nuances of sight and smell and sound are less clearly marked and lost in the general monotony of grey walls and cement pavements.”

29. “The three great American vices seem to be efficiency, punctuality, and the desire for achievement and success. They are the things that make the Americans so unhappy and so nervous.”

30. “A man who has to be punctually at a certain place at five o’clock has the whole afternoon from one to five ruined for him already.”

31. This is easy, like a high school essay! Just pad it out with quotes to make up the required 4000 words.

32. A sudden fear: Do they still count as my thoughts if they’re someone else’s thoughts first?

33. This is getting too long. I’ve added a photo of Lin Yutang so it’s more interesting.

34. Where would someone be going in a helicopter at this time of night? It’s well after midnight!

35. I’ve created a burden for myself now, haven’t I? “100 Random Thoughts” sounded cool, and I knew I had that photo. Now I’m getting quite dissatisfied with the process.

36. What the hell am I going to do with my iPod? An iPod Photo 60GB, 2 years old, sitting unused since it was replaced under warranty. Grand ideas about exploring podcasts ground to a halt as soon as I remembered that I hated the way the earphones cut me off from the world. Who’d buy an iPod that can’t do video? I feel like a sucker, falling for Apple’s hype and sheep-cool factor.

42. I was taught to write one thought per sentence; if you had two thoughts, the sentence needed to be broken into two. That’s why I used a semi-colon in the previous sentence.

52. You know, I have a lot of thoughts, not just the ones I think in words — and that’s a lot more than I write down. This is pointless. I’ve had my clever little joke. Over it.

Don’t they say that men think about sex on average every two minutes? It’s taken me ages to write this. The whole thing is a complete lie. From arsehole to breakfast time. Goodnight.