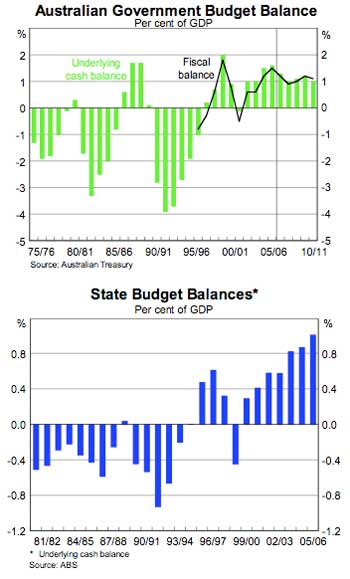 Are two posts about John Howard in one day too many? Maybe. But he is Prime Minister and we are in the lead-up to a federal election — and he is “playing the game” for all it’s worth.

And besides, what I’m about to explain is such a classic example of Howard spin — though I must thank Christian Kerr at Crikey for this one — though it’s subscriber-only content.

Here’s the deal. It’s likely that the Reserve Bank of Australia (RBA) will raise interest rates on 8 August, and John Howard reckons the state governments are to blame.

Using further graphs, which I won’t bother with here, he also shows that in every year since 1991-92, the state government sector has had lower debt and then moved to accumulate assets earlier than the Commonwealth government.

But, you know, John Howard and truth… they don’t go well in the same sentence.