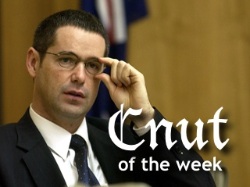 For the second week in a row, the Stilgherrian Live audience voted Senator Stephen Conroy our “Cnut of the Week” for his persistence with and behaviour over the Australian government’s Internet censorship “plans”. The program is now online for your viewing pleasure.

OK, that’s a biased sample, sure. But as I wrote in Crikey yesterday, Conroy is thoroughly tangled in his own Rabbit-Proof Firewall. I’ll try to sneak that article out from behind the paywall later. However in summary Conroy is blustering, maligning his critics with the McCarthyist tactic of bullying and calling them child pornographers and generally ignoring the rational questions being put to him.

He’s also back-pedalling fast. On ABC Radio National’s The Media Report yesterday, he was even denying the policy was about censoring legal material at all, despite clear evidence for exactly the opposite.

If the government wants to persist with comprehensive, centralised, secretive, unaccountable Internet censorship — let’s not use the spin-words “filtering” and “clean feed” because that just reinforces their moral-panic frame of the Internet being “dirty” — then they need to deploy this evidence-based policy-making they used to talk about and actually address the evidence.

Mark Newton, the network engineer Conroy’s office tried to bully into silence, has only become more vocal in his criticism. And at Online Opinion yesterday he puts his case more clearly than ever.

I can’t argue with Newton’s logic. Can you, Senator Conroy?

The online community’s argument is a simple one:

This isn’t a complicated argument. To justify the ALP’s policy, cogent, successful arguments against each and every one of those independent points will need to be mounted.

So, Senator Conroy, would you care to respond? Would anyone in government? Because if all you can do is slag off those wanting to debate the issue, your plans clearly don’t stand on their merits, do they?

12 Replies to “The argument is simple, Senator Conroy”