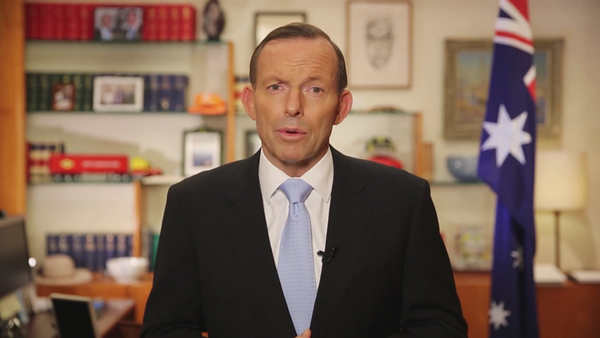 I first became aware of the PM’s message when Crikey Canberra correspondent Bernard Keane tweeted, “Maybe just me, but I find this bizarre: PM’s ’70th anniversary of D-Day’ statement morphs into political propaganda,” linking to a PDF of the press release. I’ve mirrored a copy here.

Here’s the full text, which also appeared on the PM’s website:

This week the world will commemorate the 70th anniversary of the D-Day landings.

The D-Day landings changed the course of human history.

As part of the commemoration, I will join seven Australians who were there 70 years ago.

Over 3,000 Australians were involved — including 2,500 air force personnel who provided air support for the Allied landings.

Following the D-day commemorations, I will be travelling to Canada and the United States – and will be joined by Australian business leaders.

My message to overseas investors is that Australia is open for business.

The Government’s Economic Action Strategy to lower tax, cut red tape and encourage trade will improve the competitiveness of businesses – so that we can build a stronger Australia.

We welcome investment and we are making investment more attractive by scrapping the carbon tax and the mining tax, cutting 50,000 pages of red tape and ending the “analysis paralysis” on major projects.

Our international partners can see that our Budget is again under control, we are tackling debt and deficits and we are serious about building a strong and prosperous economy.

This year Australia hosts the G20 summit to encourage growth around the world and I will be advancing that cause during this trip.

The United States, Canada and France are long standing friends. We stood together at D-Day, we trade every day and we have always shared a commitment to democracy, to enterprise and to people’s right to be free.

It’s bad enough that the messaging about the D-Day Commemoration is so drab. It “changed the course of human history”, though there’s not a shred of detail about how that happened, followed by the dull recitation of some statistics. For all his supposed respect and admiration for the military, it feels like Abbott hasn’t put an ounce of effort into conveying any emotional connection with the event.

I’ve complained about pedestrian speechwriting before. Then it was about Julia Gillard. But this from Abbott, this isn’t even high-school level writing. It’s an embarrassment. And that’s before you get to to sales pitch.

As far as Abbott is concerned, the D-Day Commemoration is nothing more than a handy place to sell Australia, another chance to parrot the same tired old soundbites.

As word of this tasteless effort spread on Sunday evening, the PM’s website went offline for a few minutes — whether deliberately or due to overload we don’t know — and when it returned this press release was gone.

The was another press release, though, dated the day before. Word spread that the original press release had been altered and back-dated. But no, this newly-discovered (at least by the mob) press release had indeed be sent on Saturday, and had presumably been sitting on the website all along.

This would all be funny enough if it had merely been this ill-judged press release being consigned to the memory hole, followed by an incompetent cover-up. What’s the point in trying to deny that the thing existed when people already had copies?

But then we discovered the video.

If the embedded video doesn’t work for you, you can view it on YouTube.

It was now impossible to pretend that turning D-Day into a sales platform was some horrible mistake made by an underling and since disowned. No, these words had the approval of the Prime Minister himself, because here they were coming out of his mouth. Still, the title of the video was quickly changed to remove the D-Day reference.

Now I can see how this all might have happened. The PM’s video is a weekly thing, a recitation of the week’s messages and perhaps a look ahead to the coming week. I suspect it’s become an end-of-week chore. I suspect that no-one cottoned on to the fact that this time it mentioned an historic war commemoration, and that maybe it needed to be done differently.

But that’s actually the point.

This is the one chance each week when the prime minister can speak directly to the nation — well, should the nation choose to listen — in his own words, unedited. But it seems like PMO is so wrapped up in the routine of daily political messaging that it can’t notice when statesmanship is required. The PM is no more than a meat puppet propped in front of a camera.

If no-one in the entire process of preparing the prime minister’s weekly address to the nation could spot the problem with the politicisation and crass commercialisation of a D-Day Commemoration — including the prime minister himself — then we’ve got a serious problem here.

Yes, part of PMO’s job is the ensure a successful re-election, but that’s not it’s only job. If the place is staffed primarily, or perhaps even solely, by the grunt soldiers of the daily political battlefield, and if the PM is so tone-deaf that the can’t figure out what sort of communication is needed when, then who’s being the leader?

Who’s creating the vision for Australia’s future? A future beyond the end of tomorrow night’s TV news, I mean. Who’s creating consensus out of different viewpoints, and uniting us in effort to achieve that vision?

[This post is one of 30 I’m doing each day during Blogjune. See them all under the tag blogjune, or subscribe to the RSS feed.]

One Reply to “Tone-Deaf Abbott no statesman, never will be [blogjune02]”