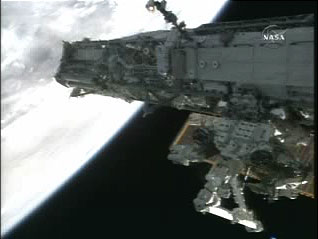 Judging by the loud clanging noises, followed by something falling off, Heidi’s task involves bashing something until it falls off.

No-one else seems bothered. I assume it’s OK to bash your space station until bits fall off.

You can’t quite see him, but up on the left is Joe Tanner. This is his sixth Extra-Vehicular Activity — oh, “spacewalk”, dammit! — so he gets to “mate the T5 to the J5” on the P4 truss segment.

That’s is, Joe plugs in a data cable.

Joe plugs in several data cables, actually, along with six power cables. They’re all part of connecting the poetically-named “upper utility tray”. And each time it goes a little like this.

Choir and Archangels: Copy that, T5 to J5.

Joe Tanner, as I say, plugs in several data cables on this EVA, along with six power cables. It’s pretty rivetting stuff.

Joe moves on to the next cable, and that’s Part A done. Next, Part B. Yes, more cables to be plugged in.

Is this really what happened to “Space: The Final Frontier”? Some kind of auditor-led DIY Ikea On Mogadon?

Back in the days of Apollo 11, we all got a day off school to watch Neil Armstrong walk on the Moon (Luna). “One small step for mumble mumble,” he said — accounts differ as to the exact wording. And then a silvery blur moved down towards the right-hand side of the screen. We took this to indicate that a man called Armstrong had walked upon the Moon.

Hell, we didn’t care about the poor quality! It’d been in the papers all week. We’d followed every moment in breathless anticipation. It’s the goddam Moon, for Christ’s sake! The Moon! We come in peace for all mankind!

But here in 2006, Heidi and Joe are an hour and a half ahead of schedule.

Huh? Ahead of schedule? You mean you’d planned for this to be slower? I should have been thrilled at Heidi “repositioning her portable foot restraint so that she has good access to her next task”, because this is the breathtaking pace of space exploration?

Screw this, I’m going to watch The Bill.

5 Replies to “Why the US space program is shite”