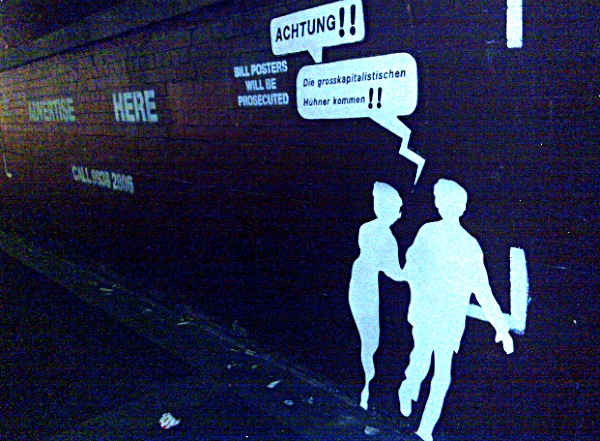 As long as I can remember, the bridge over the railway at Newtown Square, Sydney, has been covered in posters. Last week the posters were stripped, it was painted a dreary shit-brown — and then a phone number appeared. Last night this paste-up protest appeared too.

At first I’d been pleased that the bridge was getting a fresh coat of paint, despite the colour. But when the “Bill Posters Prosecuted” message appeared, along with the phone number to book advertising space, I was disappointed to say the least. Yet another community space was turned into a commercial one. No longer could anyone with a bucket of glue and a brush promote their event, now it was only those who could afford to pay commercial rates on busy King Street.

The vibrant arts community of the Newtown precinct is precisely one of the reasons we and many others choose to live here, even though we’re under a flight path and real estate prices have become outrageous. “Achtung! Die grosskapitalistischen Hühner kommen!” indeed. We do not need yet another billboard for mainstream advertisers.

Marrickville City Council, please call off your advertising broker and return this wall to the community where it belongs.