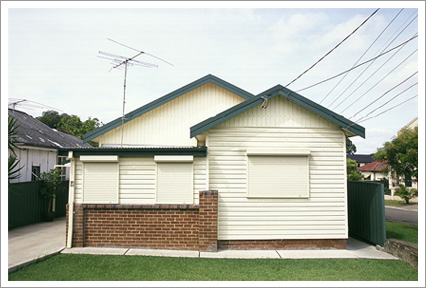 This photo from Garry Trinh’s “Welcome Home” series has won this year’s Sydney Life Prize. And I’ll bet it puts some noses out of joint.

Let’s face it, Sydney thinks it’s pretty bloody special sometimes. Loud, self-centred, self-indulgent, self-opinionated and narcissistic. So I’m always happy to see imagery which reminds us that everything’s not always as pretty as it seems.

That’s why I liked it when the City of Sydney selected ’Pong’s Anywhere Chairs project, and why I like this photo winning the $10,000 prizemoney and public viewing by half a million people — even though it presents a Sydney that isn’t as glossy as the one you’ll see in the Shoot the Chef competition or as “clever” (too clever?) as the winning photo there.

As one of the judges, Sandy Edwards, says, “The image reminds us that real estate is of high value in Sydney, yet this family home in western Sydney is uninviting.”

Sydney Life finalists are on show in Hyde Park North until 22 October, part of the Art & About festival. Thanks to Billy Law for the pointer.