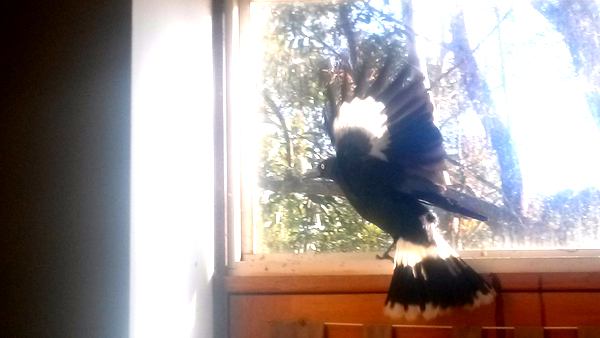 My week of Monday 20 to Sunday 26 October 2014 was moderately productive. Not as productive as I’d hoped, but close enough.

Winter is definitely over. Despite the snowfall nearby last week, this week temperatures in the Blue Mountains rose to 28C or more, and the weekend brought a mix of bright blue skies and the occasional thundery rainstorm. We have broken the climate.

I’ve also written a second piece for ZDNet Australia, as well as a piece for Crikey, both of which will be published on Monday.

It’ll be another busy one, structured around a trip to Sydney on Tuesday to go to a lunchtime briefing from NetSuite and then the OpenAustralia Foundation Pub Night. I’ll be staying in Sydney overnight.

Arranged around that will be the writing of a security-related feature plus my regular column for ZDNet Australia, and the production of an episode of The 9pm Edict, probably in that order. The exact details are still to be sorted out.

[Photo: “Flustered currawong”, taken when a pied currawong (Strepera graculina) managed to find its way into Bunjaree Cottages on 26 October 2014.] The week of Monday 11 to Sunday 17 March 2013 was nearly a week ago, so I’ll just list the media things and show you a photograph of a currawong. I know we shouldn’t feed the pied currawongs, but they actually came looking for food today. There wasn’t any. But when I put some out, this chap returned a few minutes later — scoffing a few while keeping a wary eye for the cats dozing only a few metres away, then taking a few spare nuggets back for the juveniles in their tree. A family of pied currawongs lives next door. Beautiful, smart birds. Recently we’ve been leaving food out for them, and they’re happy to steal a few bites while keeping a wary eye for the cats.

I’ve always thought that my essays are my best work, even if I say so myself. I’ve done observationals before, like Saturday Night at The Duke and Burnt out sofa, burnt out life. But this one’s different.

As I walked home through Newtown last Saturday evening, I started sending little observational comments to my Twitter stream:

Actually still on Darlington Rd, a long-haired woman plays melancholy guitar on the terrace-house balcony as a currawong flops past.

As I moved into King Street, I kept going. As I went to Kelly’s On King for a beer, I kept going. I discovered that a rapt audience was watching my comments — although not everyone liked the volume of material. I suggested they use Twittersnooze to unfollow me for a while.

The 140-character limit imposes a certain staccato style which I quite like. I was chuffed to be compared with Oscar Wilde and George Bernard Shaw and (especially) Hunter S Thompson!

Here, then, is my first attempt at Live Gonzo Twittering — as others decided to call it, though I’m not sure the label is quite right myself — across about 90 minutes last Saturday night. the only changes I’ve made have been to fix some typos. Is this the best way to present it after the fact? Enjoy!

END_OF_DOCUMENT_TOKEN_TO_BE_REPLACED 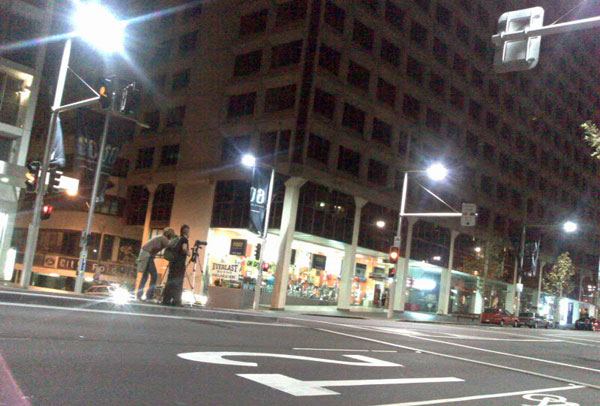 ’Pong was booked for a photo shoot on William Street for stock agency Gekko Images. Apparently it’s the first time ever that the illuminated Coca-Cola sign in Kings Cross is being turned off. “Magnanimous gesture for humanity,” I think the headline should read. ‘World’s largest caffeine pusher ceases visually polluting one tiny bit of the planet for 3600 seconds.” Their share price plummets as we speak. The moment must be recorded for posterity.

So at sunset I find myself on a train, city-bound…