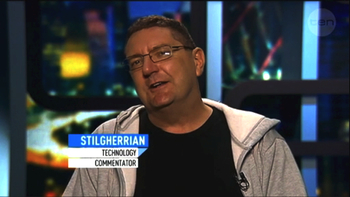 The trial of the alleged murderer of Melbourne journalist Jill Meagher revealed (at least to those who were previously unaware) the importance of evidence gleaned from people’s smartphones.

Last Thursday 14 March I ended up talking about that on Channel TEN’s The Project, following a package that featured Gizmodo Australia editor Luke Hopewell.

Just like my previous appearance on The Project, which is produced in Melbourne, I was beamed in from Sydney while sitting in front of a green screen. This time I even managed to get a picture of what it looked like from my point of view.

The video of the four-minute segment is embedded over the jump — which is immediately below if you’ve come directly to this page.

If the embedded video doesn’t work for you, you can view it on YouTube. You can also watch the video in better quality and in its original context. Of course it’s Copyright © 2013 Network Ten Pty Ltd.

As before, I was impressed with the professionalism of the well-organised team at The Project, and it was great to be on the program again after boring things like being in a different city had stymied a number of previous attempts.