END_OF_DOCUMENT_TOKEN_TO_BE_REPLACED

[Preface: The idea for this post was originally pitched as an op-ed for ABC The Drum, and the story was commissioned by editor Jonathan Green. But once the final piece was delivered, although there were elements that he liked he wasn’t sure that it said enough. It was a line ball call, he said, but in the end he passed. Fair enough. He’s the editor, it’s his call. Gentleman that he is, he acknowledged his initial enthusiasm and will pay for the story anyway. I’m publishing it here almost exactly as it was submitted — apart from adding links to the media releases in question. Unlike the ABC, my house style is not to despoil the expletives with asterisks. I would very much like to hear your comments.]

A funny thing happened on Twitter the other night. Someone unfollowed me for being offensive. That’s not so unusual. The unusual bit is who unfollowed and what offended them.

Around 10pm I received two emails.

“The two government media releases I just received, when combined, indicate a rather distasteful piece of opportunism behind the scenes,” I tweeted.

“1. HMAS Maryborough intercepts a SIEV off Ashmore Reef, 34 passengers and 3 crew aboard. 2. ‘Another boat as Coalition “turn back” policy continues to unravel’, timestamped minutes apart,” I said — and I’ll run the tweets into continuous prose to make your reading easier. I am nothing if not considerate, dear readers.

The first media release was from home affairs minister Jason Clare, the second jointly from him and minister for immigration and citizenship Chris Bowen.

I was outraged by the combination.

Having vented my spleen, I moved on to congratulate Russia for trolling Eurovision 2012 and ponder whether, hypothetically speaking, Vaseline conducts electricity. Don’t ask.

A short time later, someone with the handle @ashmidalia tweeted, “@stilgherrian And this is where I click ‘unfollow’. For the offensiveness more than the inaccuracy. But there’s plenty of each.”

“Bye,” I replied and then, to no-one in particular, “I wasn’t aware I was obliged to provide ‘suitable entertainment’ for random arsehats who hadn’t even bothered to say hello.”

And then I noticed that @ashmidalia was Ashley Midalia. The name rang a bell.

LinkedIn soon told me that Midalia is Chris Bowen’s deputy chief of staff. A staffer from one of the offices responsible for my anger! Maybe he was even the strategist in question.

Fuck me dead! This cunt of a political staffer — an ALP staffer no less! — was offended by my language! The poor delicate little petal!

“Well if I’m wrong I’m happy to be corrected,” I tweeted to the world.

“But I still think it’s disgusting that the richest nation in the world continues with this outrageous treatment of desperate people. And I still think it’s disgusting that politicians use their arrival as a trigger to attempt to score party political points. I reserve the right as an Australian to express the true strength of the emotions behind that by using equally strong language,” I said.

“Besides, over my three decades in media Ministers and their staffers have used that sort of language and worse about me so it’s hypocrisy [to complain about my language].”

“My genuine understanding is that the level of boat arrivals tracks the level of refugee movements globally. Happy to see counter evidence.”

Having exhausted my combination of anger and bemusement, I calmed my shattered nerves with a gentle episode of “The Thick of It”.

Now I won’t get into the whole boat people thing today, but this whole “offended by swearing” arsehattery got me thinking.

Swearing what we do. It’s as normal as breathing.

Our reputation for swearing is recognised around the world.

When I called American internet entrepreneur Jason Calacanis a “prick” back in 2008, it caused a minor outrage in the blogosphere. But Calacanis himself understood.

Coming from anyone else but an Australian, he told me, he would’ve been offended. But he knew that being called a prick by an Australian was just foreplay.

Indeed, only a few weeks ago no less a personage than a Minister of the Crown (do we still say that?) told me, “Mate, you need to get a fucking life!”

As a conversation-starter, after offering coffee and a comfortable chair.

Sometimes a few f-bombs and c-bombs are precisely the precision munitions needed to deliver a powerful message.

When I headlined my expletive-laden rant about the Google+ social network Right, Google, you stupid cunts, this is simply not on! that blog post ended up being read by more than 100,000 people, triggering plenty of thoughtful discussion and even an anonymous message of support from deep within Google’s bowels.

I was criticised for it, but the reality is that without those expletives the article would have been just another ho-hum whinging blog post read by a couple hundred people, if that.

A cunt or two cuts through.

And sometimes well-crafted profanity can be sheer poetry.

Besides, Mr Science tells us that swearing is good for you.

No-one has the right not to be offended. And it takes two people anyway, one to give offence and one to choose to take it.

Offended by swearing? Fuck off!

A quick reminder: I’m about to head to Seattle for the rest of this week, returning to Sydney on Sunday 30 May 2010. Why? I’m visiting Microsoft to talk security. I’ll be posting pictures and stuff at my new Posterous site, Stilgherrian’s Stream. Also on Sunday, we’ll be watching Eurovision on the big screen at Kelly’s on King, Newtown, gathering there from about 6pm. See you then?

Just in case you missed the announcement because it was buried in another post, the Stilgherrian Live Eurovision Special is tonight.

If you’re on Australia’s east coast, set your TV to SBS and we’ll provide the added commentary. If we can figure out some way of synchronising the video for everyone else, we’ll let you know.

Also, yes, I know that Eurovision is really already over. However the SBS telecast is delayed so Australians can enjoy the drama in prime time — so please don’t spoil it by telling us the winner.

The “normal” Stilgherrian Live will return at 9.30pm next Thursday night. 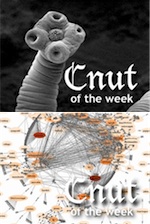