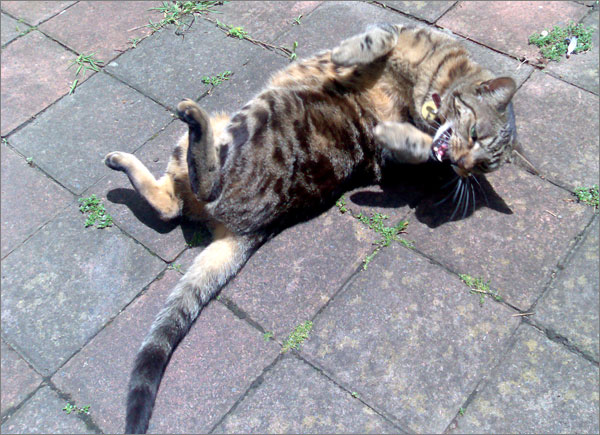 Snarky Platypus, turn away now! This is a lolcat challenge for Nick Hodge. Nick, how quickly can you turn this image into a lolcat?

(Yeah, I know this is silly. But Nick, despite working for Microsoft, is a cool guy. He even sold me my first Mac back in 1985, he’s that much of a geek. We were chatting about lolcats in Perth, and I thought a challenge would be cool.)

[Update 5.20am: Nick has already created the image, see the comments! Anyone else want to have a go?]

Excellent. The Bible (you may have heard of it?) is being translated into LOLcat.

1. In teh beginnin Ceiling Cat was invisible, and he maded the skiez and da earths, but he did not eated it.

2. The earths wus witout shapez and wus dark and scary and stuffs, and he rode invisible bike over teh waterz.

3. And Ceiling Cat sayz, i can has light? and teh light wuz.

END_OF_DOCUMENT_TOKEN_TO_BE_REPLACED

OK, I’m obviously so over-committed that I’m now officially Out Of Touch. I didn’t know what a “lolcat” was until I stumbled across this article.

Eric Nakagawa was “between jobs” in January when he found the picture at right. On a whim he and a mate created a website around it, I Can Has Cheezburger. Six month later, they’re getting 500 new submissions and 200,000 unique visitors every day.

Read the Wall Street Journal article explaining the history of the lolcat, and Anil Dash’s fantastic essay on the linguistic aspects, Cats Can Has Grammar.