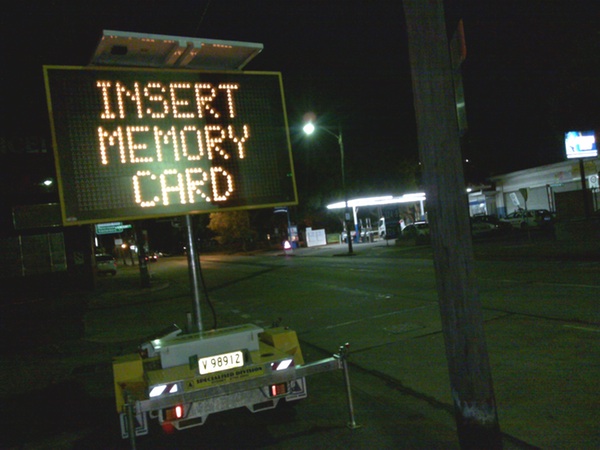 This illuminated roadside sign machine thing was seen on Sydenham Road, Marrickville, on 26 April 2010. I think there’s an important message here for all of us. Click to embiggen.

It’s a month since I complained about advertising being inserted to my “no advertising material” mailbox. How that’s gone?

The good news is that immediately following PMP Distribution chastising their walker there was a significant drop in unaddressed advertising material, perhaps to only half what there was before. Good. But there’s still plenty of “bad corporate citizens” who I’ll now name, and a few businesses who failed to respond.

First, kudos to David Jones and their distributors PMP Distribution, and also to MiniMovers and Marrickville Metro (AMP Capital Shopping Centres), who responded promptly and dealt with the problem. Well done.

A slap on the wrist to Domino’s Pizza; Go Green Insulation; Kmart; and Raine & Horne Marrickville, all of whom didn’t even acknowledge my email enquiry. Pathetic.

An especially big slap to Kmart, since your website contact form sent me an email which said:

We value your feedback, and wish to advise that the matter you have raised has been referred to one of our Customer Relations Representatives who will be in contact with you in the near future.

I’ll be in touch with all of these businesses to give them a chance to respond. And, since real estate agents feature so prominently in this list, I’ll be asking the REIA whether they consider this to be acceptable behaviour.

We also got a message from beyondblue, but since that’s not advertising but a public health message about depression I’ll give them the benefit of the doubt. Keep up the good work. 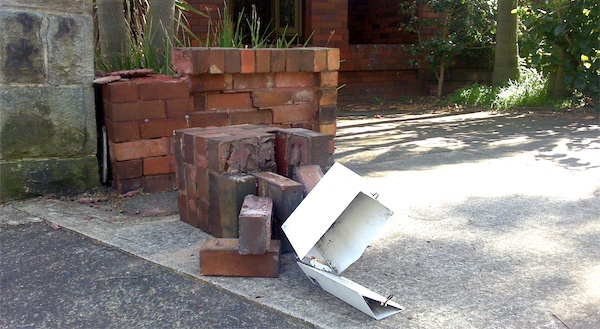 OK, some time on the weekend someone broke the brick wall which supports our letterbox. It wasn’t us. But given the poor behaviour of the junk mail merchants, who could blame us?

Despite the presence of a “No Junk Mail” sticker and the more recent addition of Marrickville council’s own “No Advertising Material” sticker, advertisers continue to shove their things into our box. So I’ve decided to name and shame.

Now I do know that in Australia these stickers have no legal force — unlike online, where the Spam Act 2003 provides stricter rules. But if someone communicates a polite request not to receive a catalog, and the first thing you do is give them the catalog anyway… well, is that really a good marketing message?

I’ve also noticed over time that real estate agents are particularly prominent in our junk mail. What is it about these overpaid pricks?

I’ll be inviting each of these advertisers to respond.

Here are the web links I’ve found for 23 August 2008, posted automatically with mirth and cabbage. 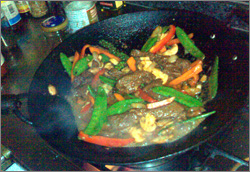 Or, as we say in English, “Kangaroo red curry stir-fry is very yummy!” And it is. Kangaroo goes so well with curry you’d almost think they were Thai beasts to begin with.

The Marrickville Organic Food Market provided both the kangaroo rump and most of the vegetables this morning — snow peas, capsicum, Swiss brown mushrooms and green pepper.

The Chinese greengrocer told us that kangaroo meat smells too strongly. She feeds it to her dogs. She has no idea what she’s missing. Still, her fresh vegetables are one of the bonuses of the Markets, as are the fresh steamed dumplings from Chinese Dim Sum King. The King will do your catering, too: chinese_dim_sum@hotmail.com or 0411 456 750.

Now I’m wondering whether I should get ’Pong to write up the recipe. Maybe it should stay our secret.