Yesterday I wrote an article for Crikey plus a post here based on Google Trends data which, it now appears, is dodgy.

Google Trends shows a steady decline in traffic to various websites since about September 2008, based on the metric “unique daily browsers”. But I was howled down. Everyone else’s metrics were not showing such a decline.

Indeed many, such as this chart of Nielsen NetRatings’ unique dailies, provided by Andrew Hunter (@Huntzie), Head of News, Sport and Finance at ninemsn, showed the exact opposite.

Trends for Websites combines information from a variety of sources, such as aggregated Google search data, aggregated opt-in anonymous Google Analytics data, opt-in consumer panel data, and other third-party market research. The data is aggregated over millions of users, powered by computer algorithms…

In other words, it’s some Google Secret Sauce. But has the sauce gone off?

The Google Trends forum is rather quiet. There were only three questions or comments posted for the whole of September, none of which received a reply, and nothing since. I can’t see that anyone from Google has responded to anything for months and months — I gave up looking back any further. Others have noted that Google Trends data differs wildly from Google’s own Analytics product — usually complaining that it shows significantly less traffic.

Google Trends is a Google Labs product, i.e. an experiment, I’m starting to think that it’s been abandoned and we’re just seeing a slow degradation due to lack of maintenance.

Meanwhile, I have changed my Twitter avatar to a goose for the rest of today.

If Google Trends’ statistics are to be trusted, it looks like there’s been a significant decline in traffic to websites over the last year — not just news, but everywhere. Except social network sites.

Following a blog post by Nicholas Moerman, a planning intern with Proximity in London, I checked out the figures for Australia sites. It does indeed look like there’s been a significant drop in daily unique visitors — which is what Google Trends measures, rather than the more common monthly uniques.

I’ve written more, and provided more graphs, in a piece for Crikey today, Is social media killing the web as we know it?

Oh, and I was also in Crikey yesterday, Baffled by Murdersoft? Making sense of Murdoch and Microsoft, where I look at some of the numbers behind the rumoured deal between News Corporation and Microsoft’s Bing search engine.

See what happens when you don’t curate your links for ten days, during which time there’s a conference which generates a bazillion things to link to? Sigh.

This is such a huge batch of links that I’ll start them over the fold. They’re not all about Media140 Sydney, trust me.

END_OF_DOCUMENT_TOKEN_TO_BE_REPLACED 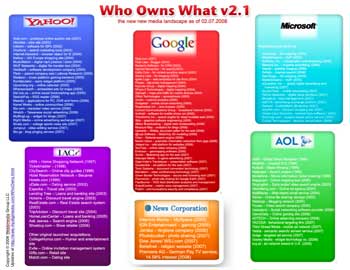 Amy Webb (now there’s an aptonym!) has updated her diagram of who owns the new media landscape. It’s also available as a PDF file.

Coming soon, a widget and RSS feed to help you track acquisitions and mergers in media.

I must admit, I’d much rather see this sort of data presented as a directed graph of ownership relationships, rather than simple lists — something like this diagram. The size of the nodes could represent the companies’ market capitalisation, and width of the lines the percentage ownership or something.