[Update 5 April 2015: There is a more recent version of this lecture, presented in September 2014, but it has not been posted yet.] 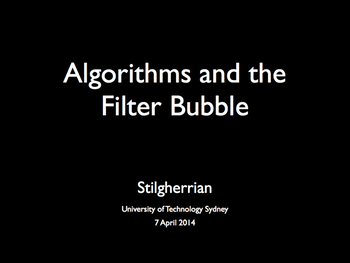 On Monday 7 April, I delivered an updated version of my guest lecture to media students at the University of Technology Sydney (UTS), “Algorithms and the Filter Bubble”. And here it is.

What’s it about? It’s about what we now call — this year at least — “big data” and how that’s changing how the media works, just like it’s changing every other part of society.

I cruise through what all this data is, where it’s coming from, who’s collecting it and where it’s going; what advertisers and media companies and others can do with this data; and some speculation about how this might unfold in the future.

There’s links to all the references over the fold, and you can follow along with the slides (PDF). The recording picks up immediately after I was introduced by the course coordinator, Dr Belinda Middleweek. A transcript may or may not follow at some point in the future.

Some people mentioned that last time it was difficult to follow some of the slides, as the PDF file didn’t show how the builds happened, so I may add a video slideshow version at some point too.

The audience was primarily first and second year students at the beginning of their media studies degrees.

[If a transcript ever becomes available, this is where it will appear.]

What was left out at the end

I didn’t keep a close enough eye on the time, which is most unprofessional of me, so I had to drop a couple of things at the end of the lecture. So what did we miss?

My planned closing was to speculate a little more about the implications of all this technology — essentially the material covered in references 26 through 30 below.

When advertisers and newsmakers know all about you, including where you are and what you’re interested in, and when robots become so good that they’re able to tailor news and advertising precisely for your interests and current state of mind — what does that mean for political persuasion, and other kinds of persuasion?

Watch the videos of the robots from the US Naval Research Laboratory responding to everyday human speech. Consider Apple founder Steve Job’s comment that the iTunes Store gives you “freedom from pornography”. Consider than in a world of filter bubbles, some news outlets with a political agenda might want to give you “freedom from confusing thoughts”. After all, Apple has already blocked from their App Store an app that provided information on US military drone strikes.

Just where might this go? As I told the media students at the start of the lecture, they are the ones who will be creating this future for themselves and their descendants, not those of us in the second half of our lives.

This work is made available under a Creative Commons BY-NC-SA license. This presentation may be re-used for non-commercial purposes within the terms of the Creative Commons license. The non-commercial and share-alike conditions are required to adhere to the licensing of the imagery used. Please contact me if you require an alternative version. As a minimum, attribution should read: “Source: Stilgherrian.” Online versions must link the word Stilgherrian to the website at stilgherrian.com.