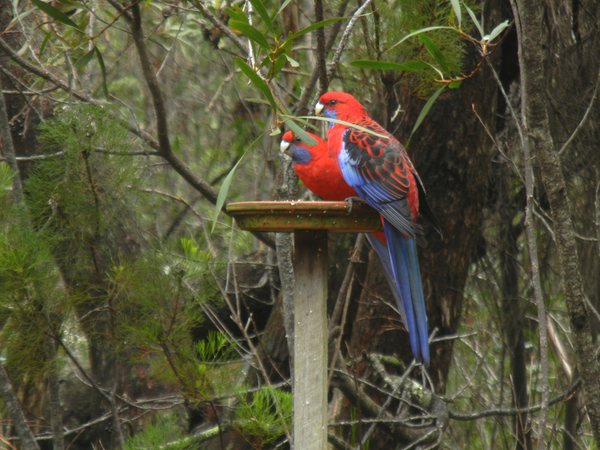 In retrospect, and posting one day late, the week of Monday 4 to Sunday 10 March 2013 was remarkably unproductive — mostly thanks to a continuing minor illness.

So the photograph of the crimson rosellas is apt. I spent much of my time hanging around Bunjaree Cottages. The rosellas figured that out very quickly — as they usually do — and were turning up each morning to demand food. I’m a soft touch.

Both of the articles I wrote this week were representatives of my column The Full Tilt for ZDNet. It’s scheduled to run every Thursday, but since I didn’t write one last week I had one on Monday as well.

None of these either.

And none of these either. I told you it was an unproductive week.

Well this week is going to be somewhat more productive. He says boldly. Today, Monday, will be a gentle start to it all, but I hope to knock off some analysis for Technology Spectator and lock in some planning — because everything keeps damn well changing.

On Tuesday I’m heading to Sydney for a media briefing by Trend Micro, followed by lunch, and probably writing up same. I’ll stay overnight because LG is launching their new smartphone, the Optimus G, on Wednesday morning and I’m curious to see how they’re going to pitch it in the face of such stiff competition from Samsung.

I’m heading to Sydney on Thursday morning too, mostly to get the results of some blood tests taken on the weekend and deal with whatever medical matters may ensue, but I plan to stay in Sydney until Saturday for a variety of work-related reasons. Probably.