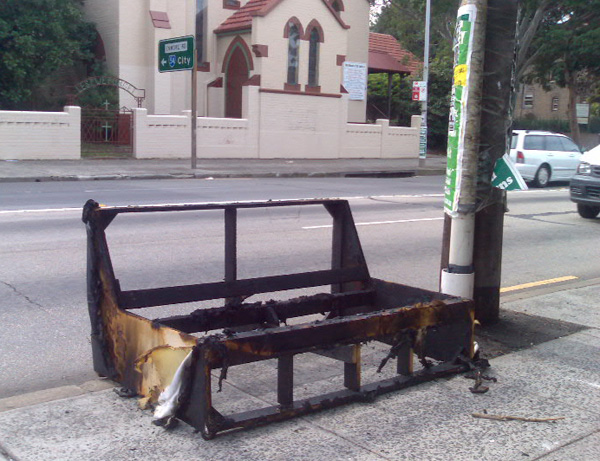 “Want to buy a sofa, going cheap?” Mike, the bloke sitting on the veranda, laughs — amused that the discarded furniture was torched. He’s annoyed they started the fire too close to the fence, though, scorching the paw paw plant that’s just starting to come into fruit.

Somehow the conversation turns to the weather-beaten old homeless guy who was camped out nearby most of this week, but who’s now been moved on. “Keith? Nah, he’s not into money,” Mike tells me. “He’s a millionaire though.” Come again?

Ten or fifteen years ago, Mike was in the queue behind Keith at the bank. “He had a bank book,” says Mike. “That’s old, I thought, so I had a bit of a sticky-beak over his shoulder — and the balance was $1.2 million!” Keith withdrew a thousand dollars in $50 notes that day, carefully folded them into tight little squares in the palm of his hand, and shuffled out into the street.

“I’ve seen him sitting there, on the nod,” says Mike, “and his hand has dropped open and there’s four or five hundred dollars in cash scattered on the ground. Anyone could just take it and he doesn’t care. Once I asked him if I could borrow two bucks ’cos I was short for a packet of smokes, and he opens his hand and shows me a bunch of notes and says take what you want. I can’t do that!”

Keith’s lived on the streets a very long time. His skin is brown and leathery. His hair and beard are a deeply knotted tangle. He sits motionless and silent for hours at a time, staring at nothing in particular. I don’t think Keith understands that he’s a millionaire.

[Names have been changed.]

4 Replies to “Burnt out sofa, burnt out life”