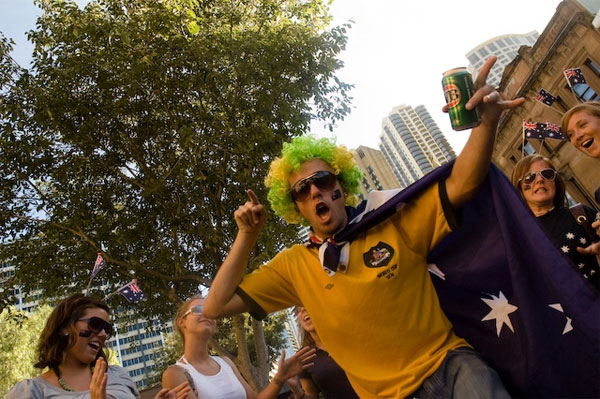 Are you proud of your culture? It depends which culture you mean, I guess. Over the weekend I’ve pondered that while we all celebrated our Australian culture, and somewhere — not that I bothered participating — gay men celebrated “gay culture”. Again.

The photo (above) is from ’Pong’s photo essay on Australia Day. Classy eh?

The rest of the pics show precisely how we celebrate the Birth of Our Great Nation at the very place where the key events of 1788 took place. It’s pathetic. It’s embarrassing.

As I Twittered to ’Pong at the time, “So many people in your Oz Day photos use the flag as clothing. Fat-arsed drunks sitting on it! Nation’s flag: show respect.”

’Pong is primed to become an Aussie. Citizenship has been approved. But the disorganised mess that is the Department of Immigration and Citizenship failed to hook him into the year’s biggest swearing-in ceremonies. That’s OK, because he wants to do an Aboriginal Welcome to Country first, and he has trouble with Australia Day.

[A] national day is normally set on the birth of the modern nation: a revolution or an independence from the colony… In general, it is a significant event in the history that reminds the people and draws them together to value the pride of the nation.

On the other hand, Australia Day is on 26 January, the day British first fleet of convicts arrived. What is to be proud of? It neglects the fact that there were indigenous tribes living here thousands years ago and the settlement has never been reconciled with them. I have not seen any message of this history in any publicity piece of the day at all. It seems to be suppressed everywhere. Therefore the core content of the day is very shallow. What to feed the punter are just public live show, fireworks and getting drunk, not any difference from New Year Eve, Melbourne Cup or even Mardi Gras.

Ah yes, Mardi Gras. Where “gay culture” (whatever that is in 2008) is reduced to a parade which is really only a public freak show followed by yet another self-indulgent dance party.

“Oh no,” I can hear certain inner-urban gay men cry, “It’s a chance for us to express ourselves as gay men and celebrate as a community.”

Yeah right. Because chances to “celebrate as a community” are so goddam fucking rare, aren’t they! There’s only Mardi Gras and Sleaze Ball and New Year’s Eve and the Harbour Party and Homesexual and one party after another every weekend of the year. Not to mention a swathe of nightclubs. There’s no shortage.

Imagine the Sydney gay scene’s response to, oh, an Australian equivalent to the Tianamen Square incident. “OMG, the government has called in the army and is shooting students at Sydney Uni. Quick! We’d better organise a party! I can wear those Diesel camo shorts!”

Actually, no. If the slaughter were at the University of Sydney the response would be a whine. “Oh, that’s so far! I’m not going all the way over there!”

My friend Richard Watts in Melbourne was spot on yesterday when he complained, “I don’t get gay culture”.

Last night I had to go and take photographs for MCV at Midsumma Mooning at the Laird, which is an event where men show off their arses to the audience, with the most attractive arse voted as the winner. When one man made his arsehole wink the crowd went wild. It was about as tasteful as a wet t-shirt competition, and just as sexy.

This afternoon, I have to go take photographs at the Peel, which is hosting an underwear party. Yes, a party of gay men, dancing, in their underwear. Don’t ask me where wallets will be kept, because really, I don’t want to know.

Now before anyone complains that I’m wrong, that Mardi Gras is more than just a party — there’s theatre and exhibitions and music and — yeah, you’re right. It does have those things. And when someone asks “When is Mardi Gras?” and you tell them that it runs right through February into early March, the response is always, “No, I mean the party.”

Anyway, I don’t want to structure my social life around one specific aspect of my persona — being a gay male — any more than around being a geek or being right-handed or having brown hair or blue eyes or a penchant for a particular kind of curry. Variety is the spice!

The Snarky Platypus and I were right to stay well clear of Australia Day celebrations, instead writing a new National Anthem.

Thankfully, Geoffrey Robertson took away all Australia Day concerns for both me and ’Pong.

Last night on SBS, in Who Do You Think You Are?, Robertson discovered that he’s descended from dirt-poor Scottish peasants and a woman who was probably the illegitimate daughter of a Prussian prince. His closing speech summed up our feelings brilliantly. I can only paraphrase it here because we weren’t recording it.

Being Australian, Robertson said, isn’t about where you come from — you can come from anywhere. It’s about knowing you can build your homes here and make your connections with this wide brown land wherever you’re from. And wherever you may travel after that — he now lives in London — you may be an ex-patriate but you’ll never be an ex-patriot.

10 Replies to “Are you proud of your culture?”