As the sun sets on 2007 — literally, as I took the photo just before I sat down to write — it’s time to reflect on an astounding year. The Snarky Platypus will join ’Pong and me later, and (perhaps) help us put together some predictions for 2008.

This was a watershed year for me, for my household and business, and for Australia. Many of the changes happened late in the year, so we haven’t noticed the effects yet. But as 2008 unfolds I think we’ll look back and see that, yes, 2007 marked a change of direction.

Personally, my understanding of how I fit into my world (and yours) became much clearer.

Almost a year ago I reflected upon the nature of my village, and then like so many I was moved by the ceremonies on the Sydney Harbour Bridge’s 75th birthday. That started a psychological journey which culminated in my trip to Thailand. That triggered many thoughts. They’re still rattling around; more will emerge. Meanwhile Facebook started re-connecting me with many old friends.

But the two most intense personal changes were meetings: one business, one social. 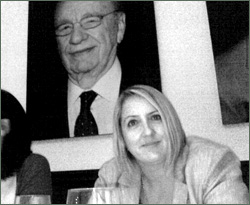 At a strategic planning session mid-year, Zern Liew helped me develop The Plan for returning to doing more media work. That’s languished for various reasons, but I did write stories for Crikey and put passion into some of the articles here. The business name Skank Media is registered and ready to unroll in 2008.

The social meeting was that dinner with Joe Wilson and Nick Hodge from Microsoft. The redoubtable Laurel Papworth was there — that’s her in the photo, with Rupert Murdoch keeping a watchful eye — and I met the witty Ajay Ranipeta, and Lachlan and Lisa who created Webjam. All good. But the highlight for me was meeting Mark Pesce.

I’ve wanted to meet Mark for ages. No, I’m not some starry-eyed fan-boy, but I did grok some of the stuff he wrote way back and figured he’d be an interesting bloke. He is.

Mark has lived in Sydney for 4 years now. We have many acquaintances in common, yet we only met this month. Even he said:

I’m amazed that we haven’t met before this. Have you been out of the country or something? For the last FOUR YEARS??? It’s. Just. Weird.

Mark is 100% right: it is weird. Then it hit me. I haven’t been out of the country for 4 years. But I have been living under a rock.

Instead of using my skills and knowledge in media and the Internet, I’ve been a mechanic — fixing other people’s tools through my little IT business. And I’ve been frustrated the whole time.

That dinner was an important trigger. It reminded me who my peers are in this “industry” and what sort of level I should be playing at. Roll on 2008!

Actually, there was a third major meeting. PodCamp in Perth and my presentation there. This reminded me, once more, that presentation and “explaining things” is a personal forte. Thank you, Crispin.

I also put on a bit of weight. We’ll deal with that later.

The Golden Age of the Iced Vovo has not yet emerged, and today there was news of severe fuckwittedness regarding Internet filtering. But on the whole I’m happy that John Howard’s Reign of (the War on) Terror has ended. I’m hoping this translates into some intelligent leadership from Chairman Rudd.

I haven’t said much about ’Pong, but he’s everywhere through this blog. Phom rak khun krub! And the Snarky Platypus has made so much possible too, in his own, um, endurable fashion. I tend not to blog about all that because, well, it’s personal personal stuff. Thank you.

I’ll stop the thank-yous there, or I’ll end up sounding like John Cleese’s BAFTA acceptance speech.

And now, gin and tonic! See you next year.

6 Replies to “Distinctly personal reflections on 2007”